Hawks In Connecticut: 8 Species That Can Be Found Here 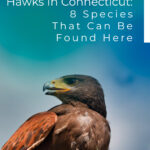 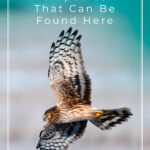 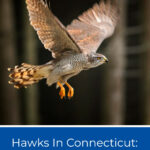 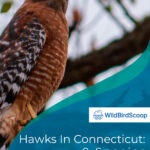 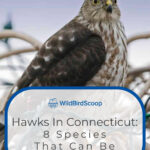 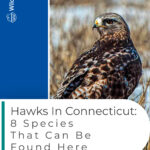 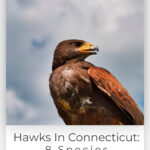 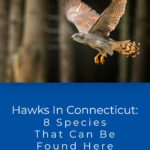 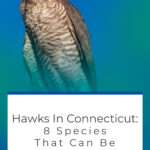 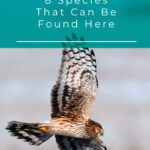 Connecticut, also known as the Nutmeg State, is home to the world’s first phonebook and a nuclear-powered submarine. It’s also home to 280 bird species that currently reside in the state’s 139 parks.

Although early settlers of America cleared three-fourths of the forests in Connecticut, almost 60 percent of the state is still covered in forests where you can see and study hawks. In this article, you’ll learn all about the hawks in Connecticut, so keep on reading to learn about these outstanding birds of prey.

While younger broad-winged hawks are light brown with coarse streaking on the underparts, adult birds have reddish-brown heads with white bands on the tail.

These birds have a piercing whistle and hunt small animals, amphibians, and insects while they’re flying. You’ll find these birds of prey spending most of their time under the forest canopy, but they watch food from tree limbs and utility poles.

Broad-winged hawks travel in large flocks that contain thousands of birds. It’s best to follow these birds during the migration season in the fall, and you can usually spot them in Connecticut during the summer before migrating south during winter.

During fall, the hawk can fly for about 62 miles per day. The birds and their broad wings can be seen circling above the forest canopy.

The northern harrier is easy to identify even from a distance, thanks to its slim body and long tail. It has an owl-like head and relies on its hearing as well as a vision to catch its prey.

When they first hatch, this species of hawk has dark brown eyes that change to greenish-yellow color as they reach adulthood. Male hawks are gray while females are brown. When it’s flying, the northern harrier usually keeps its wings in a V-shape.

Northern harriers usually fly to the ground when hunting, but during the migration season in fall and spring, you can see this hawk flying over the mountains.

This hawk usually feeds on smaller mammals, but it can take on larger prey like rabbits or ducks. If the prey is too large, the hawk will try to drown it first.

Male hawks usually have more than one mate, and they collect the food for their female mates and their offspring.

Cooper’s hawk was named after naturalist William Cooper and is almost the size of a crow. Young birds of this species have brown upper bodies, while adult hawks have blue-gray above with reddish bars on the underpants.

When these birds of prey are hunting, they will fly fast and then lower themselves to the ground, fly over an obstruction, and then surprise the prey on the other side. These hawks are known to be one of the most skillful raptors.

Cooper’s hawk can be seen everywhere, from forests to backyards where it lurks around bird feeders, waiting for an opportunity to snatch small birds.

This bird can be found in Connecticut all year long. You may know it as a chicken or hen hawk because it’s been known to snatch one of these birds right off of a farm territory.

This species of hawk is one of the most popular ones found in America, so you might see several of these birds quite frequently. If you want to see this hawk, keep your eyes on the fence posts and ears open for its loud cry. You’ll know it when you hear it, as the famous scream of the red-tailed hawk is what most Hollywood directors use in their movies when a hawk, or even an eagle, appears on the screen.

Females are larger than their male counterparts, and both sexes are dark brown on the top and pale brown at the bottom with a pale yellow and cinnamon tail.

When the red-tailed hawk is flapping its wings, it has a heavy wingbeat. The bird keeps its eyes fixated on the ground and dives slowly to catch the prey. In some cases, red-tail hawks even hunt in pairs to make sure the prey won’t be able to get away.

These hawks feed mainly on small mammals and rodents like rabbits, squirrels, moles, and mice. In some cases, they will make a meal of other birds, like starlings, pheasants, and blackbirds, while younger birds usually prefer to feed on amphibians and fish. However, it’s unlikely to be seen in your backyard, and it won’t attack cats and dogs.

Compared to other hawks, the sharp-shinned hawk is exponentially smaller, measuring somewhere between the size of a crow and a robin. Younger birds are usually brown with coarse streaks, while the adult hawks look blue-gray with orange marks on the breast.

This bird is an agile raptor that soars through dense woods to surprise its prey. It uses the dense vegetation for coverage and usually feeds on songbirds like sparrows, thrushes, and wrens.

During the non-breeding season, the bird will feed on smaller mammals and might visit your backyard to find a smaller songbird. This will alarm the songbirds in your backyard, so they will be sending high-pitched alarm calls to warn you of a sharpie’s arrival.

The sharp-shinned hawk resides in Connecticut almost all year long and usually roosts in broad-leaved trees like oaks. If you see this hawk appearing regularly in your backyard, it might be a good idea to take your feeder down for a couple of weeks.

The red-shouldered hawk is slightly larger than the broad-winged hawk, and as you probably guessed, it gets its name from the red shoulders that appear when the birds are perched.

The best way to identify this species is to listen for its distinctive call. It’s usually present around water bodies, and you can see pale white crescents near the end of the wingtips when the birds are flying in the sky.

Adult hawks have white and black checkered bodies with red breasts and black tails. You might confuse this species with the slightly larger red-tailed hawk, but they can be told apart by the distinctive red tail that the red-shouldered bird lacks.

This hawk feeds on small mammals, rodents, reptiles, and amphibians. The hawk is either soaring high above the forest or perching on utility lines and trees. The American crow competes with the red-shouldered hawk, and the two usually steal food from each other.

The northern goshawk has short wings and a long tail. It has dark slate gray plumage above and pale gray underpants. Just like other hawk species, females are larger than males, and the younger hawks are brown. It also has white eyebrows above the orange-red eyes.

Northern goshawks wait for their prey on high perches and fly with slow wingbeats. The younger birds usually live in northern states, while the mature birds choose to reside in Connecticut.

Since these hawks aren’t as strong as other species, they prefer forests with minimal undergrowth to avoid getting trapped.

Compared to other hawks, the northern goshawk is slightly secretive and hard to find. And because it values its privacy, this hawk gets really defensive around its nest and territory.

Compared to other hawks, the rough-legged hawk is typically larger and longer. The hawk is found in both dark and light morphs and usually perches on utility poles and fence posts. It gets its name from the feathers that cover its legs all the way down to its toes.

Rough-legged hawks breed in the Arctic and spend the winter in Connecticut. While it usually hunts for lemmings in the arctic, it usually feeds on smaller mammals and rodents and sometimes even complements its diet with carrion when it makes its way to America.

Non-breeding adults eat about a tenth of their body mass. When building their nests, this hawk might use caribou bones. Scientific research also shows that this hawk can track vole scent marks, which can only be seen in the ultraviolet range.

If you keep an eye on fence posts and utility lines, hawks and other birds, including woodpeckers, can be found in Connecticut. However, many of the birds listed above are shy, so if you want to study these incredible birds of prey, you’ll need to be extremely patient.