Woodpeckers In Ohio: 7 Species You’ve Got To See 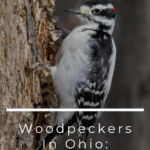 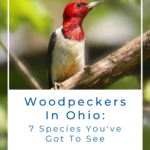 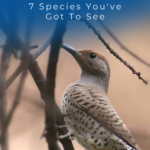 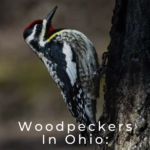 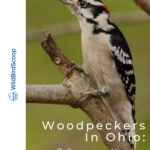 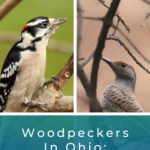 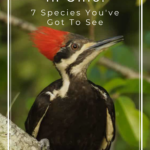 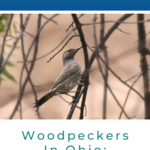 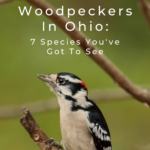 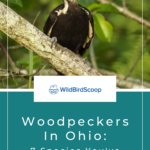 Ohio, the Buckeye State, is home to seven out of twenty-two species of woodpeckers that roam the United States’ blue skies.

Most of the woodpeckers that are common to Ohio are year-round inhabitants, so it’s not hard to see these birds during the winter, especially in swamplands and coniferous forests. Among the most popular places to spot various woodpeckers in Ohio are Cuyahoga Valley National Park and Mohican State Park’s Gazebo Trail.

In this article, we shed light on the different woodpecker species found in the state of Ohio, from their appearance to their dietary habits, so stick around if you want to learn more!

The downy woodpecker is amongst the most popular woodpecker species in the entire North American continent. It’s also the smallest. These tiny birds flaunt a black and white color pattern alongside a couple of black stripes on their upper backs.

If you look at the middle of a downy woodpecker’s body, you’ll notice a fairly large area of white feathers. Their wings tend to have white on black swirls as well. It’s easy to distinguish the males from the female downies, as the back of the male’s neck will have a small red spot.

Downy woodpeckers are fond of sun-loving deciduous trees, like the aspen. They’re not migratory birds, meaning they can be seen year-round in Ohio.

Since they’re so small in size, downy woodpeckers are cavity nesters, meaning they prefer to nest inside holes found in tree limbs. These small birds like to feed on insects, but if you hope to attract one to your backyard one day, put out a few feeders filled with suet or sunflower seeds — the downy woodpeckers will thank you later.

The hairy woodpecker is another extremely popular bird species in the United States. It looks a lot like the downy woodpecker when it comes to striping, but there are a few hints that can help you distinguish between the two, including the fact that hairy woodpeckers are fairly larger in size than their downy cousins. If you’re a more seasoned birdwatcher, you may have also noticed that the hairy bird’s outer tail feathers are white, while the downy’s are spotted.

Hairies are a lot more energetic, too, and boast a slightly larger bill than that of their downy woodpecker cousins.

It’s also worth noting that the hairy woodpecker is more far-reaching than the downy, so it won’t be hard for you to see one of them in an area like Ohio. They’re seen across the state throughout the entire year, as they’re not a migratory species, but if the weather gets too frigid for them, they might be forced to head to warmer areas in the south.

It’s common to see a hairy woodpecker in suburban areas, but since they need to dig for insects and build commodious nesting cavities, you’ll often find them in areas that have heavy forestation. When it comes to food, the hairy woodpecker can be found feasting on wood-boring insects as well as tree sap.

If you just go by their names, identifying red-bellied woodpeckers will be nearly impossible, as they barely have any red hues on their stomachs. You’ll have to look very closely at their bellies, and it’s only then that a very faint blush area can be seen.

The red-bellied woodpecker tends to flaunt black and white stripes all around its bodies, and males tend to sport red feathers on their heads, which is why they’re often confused with the red-headed woodpecker, which is also among the most common species seen in Ohio.

This bird relies only on insects for food and tends to live for around 12 years. Red-bellied woodpeckers frequent both suburban areas and spaces loaded with trees, but they have been known to take advantage of backyard bird feeders, especially ones full of suet, sunflower seeds, or peanuts.

Find these woodpeckers all over Ohio throughout every season. It’s also worth noting that their range extends more to the north every year.

The pileated woodpecker is the largest woodpecker found in Ohio and one of the largest in North America. This bird is easy to identify because of its massive size and the bright red cluster of feathers that sits on its head.

Another common calling card of these woodpeckers is the rectangular shape of the holes dug by each bird’s bill, as they are probably the only species of woodpeckers that leave four-sided shapes in trees. Because of their large size, pileated woodpeckers have a lot of energy and are some of the most aggressive woodpeckers when it comes to excavating, drilling, and drumming.

This species of bird is not as common in Ohio as the downy or hairy woodpeckers are. In fact, they’re hard to find in the northwestern region of the state. Instead, they’re more likely to live in the southeastern region of the United States. Nevertheless, these birds are unmistakable, so should you spot one or two around Ohio, you’ll have no doubts.

Though pileated woodpeckers are especially fond of berries, they like to feed on everything, from fruits and nuts to insects.

Here’s a fun fact for you: did you know that the main character from the Woody Woodpecker cartoon is based on pileated woodpeckers? If you want to locate them audibly, think of Woody Woodpecker’s laughing sound.

Spotting the yellow-bellied sapsucker in Ohio can be a little confusing because the northern half of the state is considered a migratory stop for this species during the winter, whereas the southern half is where their migratory journey ends. You need to be specific with your timing and location to determine when these yellow-bellied woodpeckers are most likely to be seen.

It’s common for yellow-bellied sapsuckers to remain in the areas from which they have drawn tree sap since sap tends to drip from trees continuously. When it comes to their breeding habits, these woodpeckers prefer to breed in the north, then migrate south right before the winter.

If you want to maximize your chances of spotting one or two yellow-bellied sapsuckers in Ohio, we recommend heading to the southwestern region of the state during the winter.

The northern flicker is common across the entire United States, but this creature is quite unusual compared to its cousins. For starters, this bird doesn’t like to excavate for bugs. Rather, it uses its bill to look for ants on the ground to eat. Secondly, northern flickers do drum on trees, but this is not so they can drill or excavate; it’s simply to communicate with each other or defend their territory.

These birds are among the largest woodpeckers in North America, and because they’re able to adjust to different weather conditions, they’re also found in Canada, Mexico, and Central America.

Northern flickers found in Ohio tend to have yellowish tail feathers and white bellies that are spotted with black dots, and a bird of this species will also have a splash of red on its head.

A bird that’s true to its name, the red-headed woodpecker sports crimson coloring from its neck up to its head. Their bellies and wings are both white, but the wings are accentuated by black spots.

Red-headed woodpeckers are quite unique in the way they feed on insects, as they’re aerial hunters that like to catch flying insects mid-flight. These birds are also fond of seeds and nuts, which is why they’re often found on farms and orchards where they can gather all the food they want from the ground.

The red-headed woodpecker, who likes to travel in groups, can be found throughout the entire year in Ohio.

In addition to the seven woodpeckers, we introduced you to above, Ohio, the birthplace of aviation, is full of many other wonderful bird species that are worth checking out, ranging from the Cardinal, American Goldfinch, and Carolina Wren to the Cerulean Warbler, Tufted Titmouse, and Northern Bobwhite.

Should you find yourself in Ohio, be on the lookout for a few new feathered friends as you peer up at the sky or the branches of the trees above you.