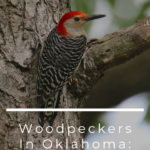 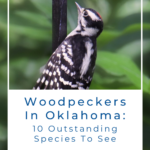 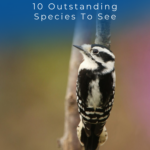 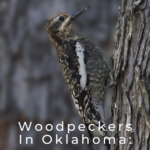 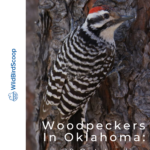 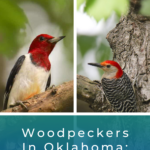 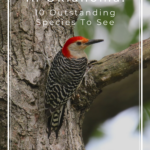 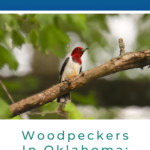 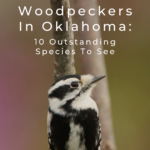 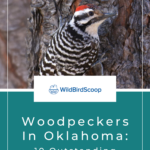 No sooner than a few minutes after arriving in the Sooner State will you find out just how much Oklahoma really has to offer.

Oklahoma has parts of four mountain ranges and about 51 parks, so it’s no surprise that an abundance of birds is included in the state’s offerings. Today, we focus specifically on woodpeckers. While the word woodpecker isn’t necessarily common among birding enthusiasts who live and visit Oklahoma, this state is home to 10 species of this outstanding bird.

During the winter months, both red and yellow-shafted Northern flickers can be found in Oklahoma. (Note that the color differentiation refers to the feathers under the wings and the tail.) The yellow-shafted flicker is more dominant, most commonly occupying the eastern part of the state, and the less common red-shafted Northern flicker is primarily found in the west.

The Northern flicker digs its tongue into ant colonies found in fallen branches and on the ground. But when this bird frequents the residential areas of Oklahoma, it digs its bill into feeders filled with suet.

If you happen to spot a medium-sized bird with a black and white striped back, white rump, black tail feathers, and black bill, it’s more than likely a golden-fronted woodpecker. This bird can be found in southwestern Oklahoma and parts of Texas, where it’s frequently mistaken for the red-bellied woodpecker.

The golden-fronted woodpecker mostly enjoys a mixed diet of insects, nuts, and fruits, but it might also feed on the eggs of other birds and lizards. These birds aren’t shy and are known to visit residential and park areas.

Though Dryocopus pileatus’s claim to fame is being the second-largest woodpecker in North America, the pileated woodpecker is also known for inspiring the creation of the well-known cartoon character, Woody Woodpecker.

This large woodpecker is more common in the western parts of Oklahoma, and it’s easy to identify it by its black and white striped back and bright red crest. Males and females look almost the same, except males sport a red stripe on their faces. When this crow-sized woodpecker takes flight, notice its white underwings.

This bird plays a crucial role in protecting trees from pest infestations, using its bill to drill rectangular-shaped holes in rotten trees to get to carpenter ants.

The yellow-bellied sapsucker makes its way to Oklahoma during the cold winter months, and you can easily identify these woodpeckers by checking out the well-organized sap wells they dig into trees.

Because of its name, it shouldn’t come as a surprise to you that the yellow-bellied sapsucker uses its brush-shaped tongue to lick the sap out of the holes it digs in trees. They also feast on any insects that managed to get themselves stuck in the sap.

Not only do these birds drum on trees, but they can also be found drumming on manmade objects like metal signs, as well.

While both males and females of this woodpecker species are known for their barred black and white backs, the male makes itself known by the red streak — called a cockade — on the back of its head.

Unlike other woodpeckers that prefer dead or rotten trees, this one prefers old, live pine trees that have been affected by heart rot. The bird digs a nest in the afflicted trees and pecks holes that leak sap, creating a barrier around the cavity entrance that protects from predators.

Unfortunately, these woodpeckers are currently on the Endangered List, so you won’t see too many of these small birds in Oklahoma or North America in general. It was a loss of habitat that affected the range and breeding capabilities of these woodpeckers, ultimately leading to their decreased population.

While you’re keeping your eye out for ladder-backed woodpeckers, be careful not to mistake them for Nuttall’s woodpecker. They look very similar, except the ladder-backed bird has fewer black feathers on its head.

This woodpecker gets its name from the neat stripes on its back that look a bit like ladder rungs. Males and females sport different colored crowns, red on males and black on females.

When looking for this bird in Oklahoma, keep in mind that this bird doesn’t like to fly for long periods and will most likely stay hidden in thick vegetation. It’s quite common to find this bird in dry areas, and it feeds on adult insects and larvae.

A friendly bird you can easily find in residential areas, the red-bellied woodpecker looks a lot like its red-headed cousin, as both birds wear bright red caps and black and white striped backs and wings.

This bird is typically found in the United States’ southeastern states and is a common Oklahoma resident all year long. Look for them in deciduous forest areas. You just might hear this bird before you see it; it has a distinctive rolling call that makes it easy to identify.

When it’s time for this bird to eat, it sticks its long tongue out and uses its sticky spit to help catch larvae from the deep crevices in dead trees.

The red-headed woodpecker is medium in size, falling somewhere between a robin and a crow. It has a large head, stiff tail, and a spike-like bill that it uses to feed on larvae, nuts, smaller birds, and rodents. Sometimes, it even stores insects, like grasshoppers, to feed on later.

These birds are highly territorial, and they may destroy eggs or nests of other birds to protect their own space.

During the winter months of the year, find our red-headed feathered friend across the eastern three-quarters of Oklahoma, usually in oak-dominated areas so they can feed on acorns.

The downy woodpeckers, known for its black back and spotted gray feather, is one of the smallest and most common species of woodpecker you’ll find in Oklahoma. If you’re not careful, you might mistake this bird for the hairy woodpecker, but the downy sports a smaller bill and is smaller in general.

The male woodpecker has a small patch of red feathers on the back of its head that females lack, but both sexes boast a white stripe down their backs and white spotted wings.

The downy woodpecker isn’t exactly shy, and it’s not unusual to see one or two of them in a residential area, and if you fill a bird feeder with suet or seeds, you can draw this bird right to your backyard.

Unless you’re in eastern Oklahoma, you won’t see this bird in urban or residential areas, but you will spot it in highly forested land. When it comes to finding food, the hairy woodpecker likes to forage on the trunks of trees, but it will also pick up bugs or larvae left behind by the pileated woodpecker and lick sap from wells dug by the yellow-bellied sapsucker.

Currently, 480 bird species live in Oklahoma, including the woodpeckers listed above, so if you live in this state, you won’t have to travel far to see and study these amazing creatures.

Woodpeckers can be seen in areas as common as parks and neighborhoods, so just pay attention to their distinctive calls, and you’ll definitely be able to spot one.