15 Woodpeckers You Can Watch In Idaho 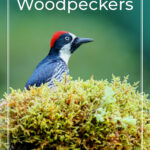 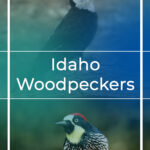 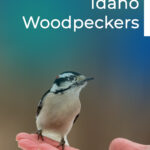 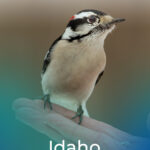 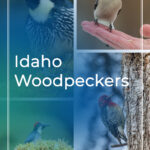 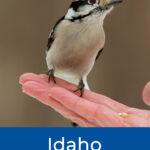 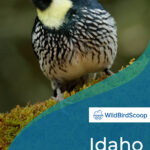 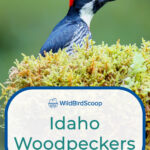 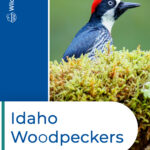 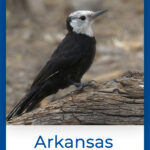 Today, we’ll be getting to know them.

They sing, they drum, and they love burnt trees! Here are Idaho’s 15 types of woodpeckers.

The Pileated Woodpecker is America’s largest woodpecker, where its size is nearly the same as a crow. It’s also the only species of the Dryocopus genus you can find in the U.S.

Known for its fiery red/orange crest and zebra-patterned head, a pileated woodpecker is a pleasure to watch. To distinguish males from females, you’ll find a red stripe on a male’s cheek that’s absent on a female’s.

You can hear the drumming of a pileated woodpecker from miles away. They usually drum on dead trees looking for carpenter ants, creating unique rectangular drill holes in rotten trees.

Lewis’s Woodpecker is among the uncommon woodpeckers that you can find in Idaho. It’s characterized by striking dark red hues on its feathers, especially on its underparts.

The bird is named after Meriwether Lewis, who discovered it on his famous expedition in the west of the Mississipi.

As the name suggests, the white-headed woodpecker sports an elegant black and white look with an easy-to-spot white head.

It’s rather one of the uncommon woodpeckers, where it inhabits Northern Boreal forests for foraging reasons. White-headed Woodpeckers are always on the lookout for wood-boring beetles. Disgusting, we know!

The Downy is the most common woodpecker in America.

Like most woodpeckers, ‘Downys’ feed on insects, in addition to some fruits, seeds, and sap. They organize their foraging, where males thrive to the upper half of trees and small branches, while females stay grounded in the lower half.

The perfect time to watch a downy is fall, where they move to the city looking for wood-boring larvae. These ‘Downys’ are serious when it comes to food!

The Hairy Woodpecker bears so much resemblance to the downy that many people might not tell them apart. Getting a closer look, you’ll find that the Hairy’s beak is a bit longer than downy’s. Besides, the white feathers are more dominant in the hairy woodpecker.

One of the interesting facts about hairy woodpeckers is that they vary according to the region. For example, southern birds are remarkably smaller than those of the north.

Relying heavily on ants and beetles in their diet, northern flickers spend more time digging the ground rather than on trees. Don’t panic if you scare one away while hiking in one of Idaho’s trails!

Another reason why you might scare them off is that you won’t distinguish them easily while they’re on the ground, thanks to their brownish plumage.

True to the name, sapsuckers feed on sap from trees, especially willow trees. As you might imagine, it goes like this; the sapsucker pecks the tree till sap flows, then it sips it using its small tongue.

When it comes to food, sapsuckers aren’t ascetic. They still need insects and larvae to get protein. Usually, the parents go out to bring insects to their offspring.

Sapsuckers also have a special bond with aspen groves, where they hole their nests there.

To be fair, only female yellow-bellied sapsuckers have actual yellow bellies. Don’t expect to spot a neon-like yellow belly on a male. The most you can get are some pale yellow hues on its throat. Did we mention that the Red-naped sapsucker also has a yellow belly?

As for the body itself, both males and females have elegant black plumage with white vertical stripes, in addition to a red crown.

What makes Williamson’s sapsuckers stand out is the extreme diversion of appearance between males and females. While males are large and black with occasional white patches, especially on the lower part of the wing, females have black and white barring feathers with a brown head.

On top of that, males usually have a subtle red patch on their throats with a yellow splash on their bellies, whereas females exhibit black-patched bellies.

While more common in the southeast, you can ‘accidentally’ spot a pileated woodpecker or two in Idaho and Wyoming.

The beautiful bird has black and white barred patterns on its back, wings, and tail. Alongside a grey-ish belly with red hues. Females have two red patches at the nip and towards the bill, while males have one continuous red patch that extends from the bill all the way back to the nip.

Thanks to its relatively large red head, you can easily identify a red-headed woodpecker. Its body is composed of two-color blocks; a plain white belly and black-feathered wings with white patches towards the end. Both males and females exhibit the same look.

One way to drive it away from your property is to install bird netting. They’re smart enough to avoid bird spikes.

It’s hard to miss an Acorn woodpecker, as it stands out physically and vocally.

When it comes to looks, both males and females sport black and white plumage with a red feather crown that’s clearer in males. Their face is black and white with a touch of yellow.

Acorns are known for their loud squeaky sound that they use to greet family members and mark territories. It’s not the most pleasant sound, but it’s surely one that you can’t mistake!

Black-Backed woodpeckers love to feed on larvae; that’s why they inhabit conifers, especially in North America and western mountains. The species can be found heavily in recently burnt coniferous and deciduous forests, where it feeds on wood-boring insect populations.

Their solid black backs and seamlessly white striped bellies make it hard to distinguish a black-backed woodpecker from a tree, especially a burnt one.

The three-toed woodpecker breeds in the north. Its appearance is pretty similar to the black-backed woodpecker but in a smaller size and more visible in barred black and white feathers.

Similar to the black-backed woodpecker, you’ll most probably find an American three-toed woodpecker lingering around burnt trees. It’ll chip at dead trees till the bark comes off, then it’ll feed on the insects and larvae that flow out of it.

Hearing a woodpecker constantly drumming against a tree in your backyard is surely annoying. However, if you’re in Idaho, it’ll be hard not to appreciate the variety of these smart creatures.

They’re just trying to feed their children, after all!