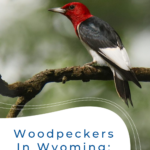 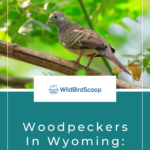 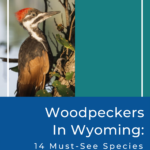 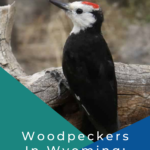 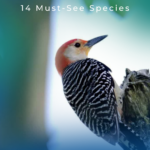 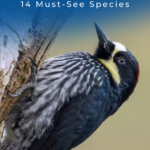 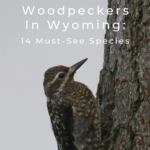 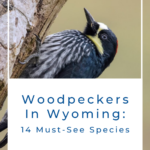 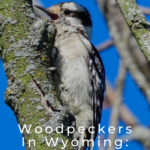 The state of Wyoming is the tenth-largest in the United States, but at the same time, it’s the least populated of all 50 states.

Wyoming is known for many things, but not for its main transportation hubs or busy cities, which is excellent news for the state’s wildlife and their habitats. Anywhere you go in Wyoming, you’ll come across vast plains and soaring mountains. Not to mention the seemingly endless conifer forests and national parks, which are magnificent all the same.

These natural habitats have become home to a large number of animals and birds. Today, we’re going to focus on the adorable pecking bird: the woodpecker. There are around 300 species of woodpeckers, spread across many countries around the world. Twenty-two of these inhabit the United States alone, with 14 species of woodpeckers making their home in Wyoming.

You can find various woodpeckers, mainly in the Black Hills, the Great Plains, Yellowstone, and everywhere in-between. Read on to learn about the diverse woodpecker population in Wyoming.

They’re known for their purplish-red feathers on the stomach. Other distinctive features include their gray collars and dark wings.

Though Lewis’s woodpecker posts himself up on tree branches like other woodpeckers, it obtains food by catching insects as they fly through the air, just like a flycatcher.

Find the acorn woodpecker living in a group in oak woodlands. These birds look a bit like clowns, and both the female and male adult acorn woodpeckers are covered in brownish hues. There are also small patches on their backs covered in green.

Male acorn woodpeckers have red crowns, whereas the females have white and black caps.

As you probably gathered from the bird’s name, acorn woodpeckers are known to gather acorns by the hundred and wedge them into tree trunks or holes in telephone poles.

These medium-sized birds use their spike-like bills to hammer on wood for insects, catch food as it flies through the air, or hunt for its next meal on the ground.

The red-headed woodpecker lives among pine savannas and dead timber in the middle of swamps, and if you set up a suet feeder in your backyard, you just might spot one of these woodpeckers hanging around your home in the winter.

If you ever spot a woodpecker soaring through the sky, it’s more than likely a member of the downy species. This bird is the smallest and most common of the woodpeckers found in North America, and you can find it in woodlots, residential areas, and parks.

Known for its small-sized head and short bill, the downy woodpecker has undersides and wings that are black with white spots, and its belly and throat are covered in white feathers. One of its most distinctive qualities is the dark spots on the white tail feathers.

Hairy woodpeckers like to eat insects, like wood-boring beetle larvae, ants, and caterpillars, but when these are not readily available, they will settle for fruits, nuts, seeds, sap, or suet from a backyard feeder.

These birds can be found in much of North America, including Wyoming, year-round.

Despite the implications of this bird’s name, there are only faint traces of red on their bellies. Instead, their heads are bright red, the crimson feathers running down their napes. These birds also sport black and white barred backs — they’re so striking, you’ll notice them anywhere!

The red-bellied woodpecker uses its barbed tongue and sticky spit to pull food out of tight crevices, snacking on insects that burrow in the wood or nuts it hoarded earlier. Occasionally, this bird will even eat tree frogs, other birds’ eggs, sap, and small fish.

These inky-black woodpeckers are found more in the Northern Boreal forests, especially in recently burned or damaged areas. Typically, this woodpecker forages for food by peeling off strips of bark from dead trees or fallen logs, but it will also eat insects as they fly through the air or from live trees.

You can tell them apart from other woodpeckers by the color of their crowns. Males’ are yellow, and females’ are black. These birds also sport a white stripe on their faces and black barring on their flanks.

These birds are among the handful of woodpecker species that only have three toes instead of four. You might think having one less toe than the majority would put these birds at a disadvantage, but it’s actually quite the contrary: the lack of a fourth toe allows the black-backed bird to lean farther away from and deliver stronger blows to a tree as it digs into the wood.

The American three-toed woodpecker shares many traits with the black-backed species, including the yellow crowns on the males, black crowns on the females, and, as you probably guessed by its name, three toes. One difference is that they’re slightly smaller in size, and their bills are also a bit shorter.

This black and white bird is small, but don’t let its size fool you. Thanks to its three toes and skeletal structure, the American three-toed woodpecker packs a massive punch.

This woodpecker species breeds farther north than any other woodpecker in America, and they like to spend most of their days in areas that have been recently burned or afflicted by bark beetle infestations foraging on live or dead conifer trees.

With the exception of the presumed-extinct ivory-billed woodpecker, the pileated woodpecker is the largest species found in North America — it’s almost as large as a crow!

Pileated woodpeckers are mainly known for their black backs, red crests, and the white line that runs down the sides of their necks, which extend to the wings once they’re in flight. Each of them also sports a chisel-like bill that’s almost as long as the bird’s head.

The pileated woodpecker can be spotted in mature forests with plenty of dead trees and downed logs, and if you hang a few suet feeders in your backyard, one of them just might pay you a visit.

The aptly-named white-headed woodpecker has a white cap that forms a gleaming crescent when it’s flying. The males have a small patch of red feathers on their napes, while the females’ heads are entirely covered in white feathers.

The white-headed woodpecker can be found around large pines and build their nesting sites in cavities of heavy, dead tree stumps.

As far as this bird’s diet is concerned, it, like most woodpecker species, mostly eats insects, but thanks to its preferred habitat, the white-headed bird also has access to all the pine seeds it can eat.

The northern flicker is a busy bird, making its way across North America throughout the year. They’re pretty commonly spotted across the United States year-round and tend to head to the northern regions to breed and the south for the winter.

While every northern flicker has a brown body and white rump, you’ll see a bright flash of color as they’re in flight: red in the east, and yellow in the west, which is where the two flicker subspecies — the red-shafted flicker and the yellow-shafted flicker — derive their names.

Both these subspecies are ground feeders, and Wyoming serves as a meeting point for the two types of birds. There, they can find insects, berries, and seeds as they peck along open fields.

The puffy-feathered Williamson’s sapsuckers are more spread out than other species, and they can be found in the Cascades and the Rocky Mountains.

They look somewhat similar to flickers, with brown bodies and black-striped backs. Both females and males of this species have yellow bellies, but you can tell the two apart by the color of their head and neck feathers. Males have black crowns, while the females’ are brown.

Williamson’s sapsucker drills tiny holes in the trunks of large, coniferous trees and use their tongues to lap up the sweet, sticky sap that oozes out. While sap makes up a large percentage of these woodpeckers’ diet, they eat lots of ants during their breeding season and will also make a meal of fruits and berries.

The medium-sized red-naped sapsuckers are more commonly located in the Rocky Mountain regions of Wyoming, as they migrate there during the colder months.

This primarily black and white woodpecker’s most distinctive feature is the red feathers on its crown. Sometimes, you may also find a red patch on their necks.

You might hear their stuttered drumming pattern as they drill into aspen, birch, or willow trees, but if you can’t hear them, look for rows of tiny holes in the trees, and use them as a map to guide you to these red-naped creatures.

Despite the implications of its name, yellow-bellied sapsuckers rarely have yellow feathers. Instead, the males sport bright red feathers on their throats, chins, and foreheads. Females, on the other hand, have a much lighter shade of red mixed in with their white and black feathers.

This species of woodpeckers are pretty small, about the size of a robin, and has a straight bill that it uses to dig both round and rectangular holes in tree trunks. As sapsuckers, the yellow-bellied bird’s diet mostly consists of sap from young, deciduous trees, but they’ll also eat insects, berries, and fruits.

Interestingly enough, this is the only woodpecker in eastern North America that’s completely migratory, and it tends to be a summer resident of Wyoming.

Some of these wonderful birds are year-round Wyoming residents, while others come and go as the seasons’ change. What all these pecking birds have in common, however, is that they’re quite lovely to behold in their natural habitats, so if you find yourself in Wyoming, be on the lookout for one or more of these species.