Woodpeckers In Utah: 11 Species That Call This State Home 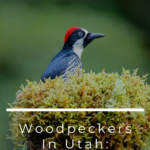 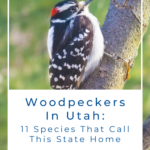 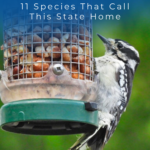 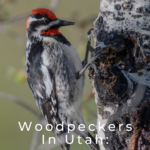 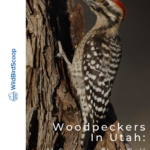 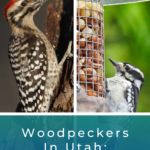 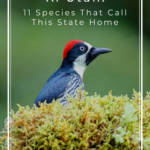 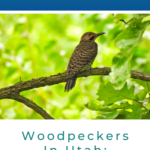 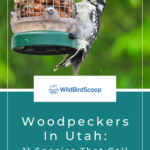 Utah is one of the top skiing destinations in the United States and is also home to the largest saltwater lake in the western hemisphere. However, if you’re not a fan of skiing and spending a day at a salt lake isn’t your cup of tea, you’d be happy to know that thanks to the 460 bird species that make themselves at home in Utah, the Beehive State is a prime location for birding.

There are currently 11 species of woodpeckers in Utah. Keep on reading to find out how you can spot these popular birds.

The red-naped sapsucker has a black and white body with a red cap, nape, and throat. See if you can spot the long white stripe on its folded wing. Male birds have red chins, while female birds have white chins.

These birds drill holes in trees to lick up the flowing sap with their tongues, but it’s common to see these woodpeckers munching on insects, fruits, and berries as well, especially in the winter. This woodpecker is usually found in the willow trees that grow around the Rocky Mountains and residential areas. It flies south to Mexico and Central America in winter and can mostly be spotted in Utah during its breeding season.

It’s typical to spot the northern, or common, flicker across America all year-round. In Utah, you’ll likely spot the red-shafted northern flicker. It has red hairs on the underside of the wings and tail, while the rest of the body is grayish-brown with black spots.

This bird is commonly found in residential areas and will visit your backyard occasionally. When they aren’t spending time at your bird feeders, they will spend time in almost any habitat, so long as it has trees. The ground-feeder makes most of its meals from ants, but it will also eat beetles, fruits, berries, seeds, and nuts.

Though the red-headed woodpecker is known for its bright head, when these woodpeckers are younger, they sport gray heads until puberty. The rest of these birds’ feathers are black and white, like many other woodpecker species.

Unlike others, however, the red-headed bird swoops in to catch insects while they’re flying or forages for larvae and bugs that live in the bark of trees. It feeds on nuts, rodents, spiders, and grains when wood-boring larvae are hard to find.

It’s easy to find the red-headed woodpecker in pine forests, and thankfully, due to the conservation of its habitat, this woodpecker’s population has increased.

The color of Lewis’s woodpecker makes it a lot different than other woodpeckers. It sports a pink belly, gray collar, and a dark green back.

Not only does it stand out because of its appearance, but because of its behavior, too. Instead of using its bill to dig into trees for insects, it prefers to catch them while they’re flying through the air. When those aren’t readily available, though, it feeds on nuts and berries. In most cases, this bird will stock up for winter by storing nuts in the crevices of trees.

These woodpeckers are friendly enough to visit residential areas to feed on suet but might get aggressive towards other birds.

The acorn woodpecker has clown-like wide eyes and a black body with a white belly, throat, and forehead. Males and females can be told apart by looking at the red patch on the males’ forehead and the black spot located between the forehead and cap of females.

These woodpeckers have a weird laugh and like to dig for insects in dead trees. As its name implies, the woodpecker also enjoys acorns, storing thousands of them in holes dug into trees. They’re also very social, and a group of males and females engage in co-parenting to guard the nest.

It’s common to find the acorn woodpecker in parts of Utah all year long. Just look in oak and mixed oak forests, and you’re sure to spot one or two of these birds.

The American three-toed woodpecker is small but mighty, regularly using its lack of a fourth toe to its advantage. It can lean back farther away from the tree it perches on, and can therefore pack a harder punch when it begins to dig.

These woodpeckers have black heads and yellow foreheads, which are absent in females, and juveniles of this species sport yellow crowns. They can typically be found in burned, bark-beetle infested, or otherwise damaged forests. It likes to dig trees, leaving patchwork as it forages for bark beetles.

During spring and summertime, this bird will call other woodpeckers and start drumming on trees.

The downy woodpecker is the smallest and one of the most common woodpecker species in North America. These birds’ primary habitat is open, deciduous woodlands, but they will often visit residential areas and backyard bird feeders.

This woodpecker has a black body with a white belly, throat, and back. Male birds have a red patch on the back of the head. These small, black and white birds are slightly smaller than hairy woodpeckers, but their appearances are so similar, you may confuse the two at first.

The downy woodpecker forages for insects on small branches and feeds on larvae, caterpillars, and crop pests.

Much like its downy woodpecker cousin, the hairy woodpecker species are commonly found across the majority of America year-round. Look for it hanging on a tree trunk in a mature forest.

Though a little bigger than downies, these birds look rather similar, sporting black and white wings and a large patch of white feathers running down their backs.

Though the hairy woodpecker’s diet mostly consists of wood-boring beetle larvae, ants, caterpillars, and other insects, it also likes to feed on the sap from the sap wells dug by sapsuckers. This bird also follows close behind the pileated woodpecker to feed on the insects that the latter may have missed while foraging.

Just as its name implies, this black and white woodpecker is known for the stripes on its back that look like the rungs of a ladder. Look for a red crown on males of this species and black in females.

If you hope to find a ladder-backed woodpecker while out and about in Utah, it helps to look down and to the side rather than up at the sky. Unlike other woodpeckers, the ladder-backed bird doesn’t like to fly for long periods of time and prefers to hide in the thick vegetation.

These birds prefer to live in dry habitats, like deserts and thorn forests, and eat beetle larvae, caterpillars, and the occasional cactus fruit.

This woodpecker is a migratory bird that lives in Canada and travels south in winter. The female birds have red foreheads, while male birds can have yellow or red foreheads. Since they’re black and white like many other woodpeckers, identify these birds by their loud calls and stuttered drumming sounds.

Male and female Williamson’s sapsuckers look so different that scientists originally considered them to be two separate species. Males have black heads, backs, sides, and tails, with a red chin and bright yellow belly. Females, on the other hand, have pale yellow breasts and brownish heads with fine bands on their backs.

In typical sapsucker fashion, this bird likes to feed on insects and sap and excavates a new nest cavity every year, sometimes even using the same tree.

The next time you’re on a hike in one of Utah’s national parks, keep your eyes and ears peeled for signs and sounds of one or two of these woodpecker species.

Some woodpeckers are also regular visitors to the residential areas in Utah, so attract some to your backyard by leaving dead trees in your yard (as long as they pose no threat of danger) or a put up a bird feeder filled with suet in winter.