Woodpeckers In Washington: Try To Find All 11 Species 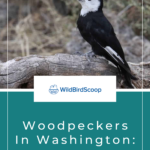 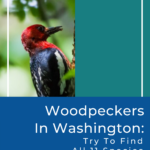 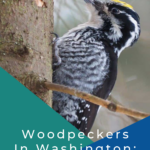 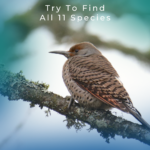 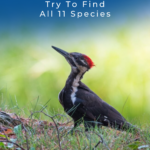 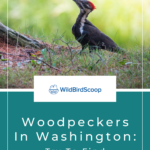 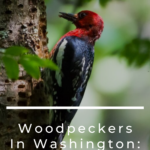 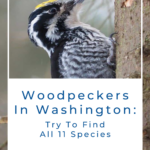 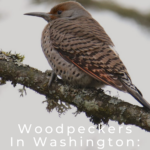 With about 100 state parks, Washington is a real paradise for bird watchers that can spot more than 500 species of birds flying around. Although some of these birds are continuously threatened by the changes in climate and habitat, woodpeckers are quite common to see.

There are currently 11 species of woodpeckers found in Washington. Keep on reading to learn more about these fascinating birds.

Known to be one of the smallest woodpeckers, the downy woodpecker is between the sizes of a robin and a sparrow.

It has a black body with a white back, belly, and throat, and white spots on the wings. It also has white stripes on the head. Males grow a red patch on the back of the head when the bird reaches maturity.

It has a loud call and likes to drum on trees. It usually flies in an acrobatic style and likes to forage for larvae.

The hairy woodpecker looks a lot like the downy woodpecker, but it’s slightly larger. The main difference between the two species lies in the body to bill ratio.

This bird follows several woodpeckers, like the pileated woodpecker and yellow-bellied sapsucker, to examine the excavations left behind and feed on the larvae that remain in the holes. It also feeds on the sugary sap from the sap wells.

It does a lot of excavations as it forages for food and is usually found in mature forests. While it’s not commonly found in backyards, it might visit yours if you fill your bird feeder with suet.

The northern flicker is one of the most common woodpeckers in Washington. It is slightly bigger than other woodpeckers and has black markings on the back and wings.

The northern flicker is a ground feeder, unlike other woodpeckers that dig the tree bark. It is either penetrating ant colonies with its barbed-like tongue or feeding on horizontal logs.

It might also feed on plant matter and will more than likely visit your backyard if you have a bird feeder.

The pileated woodpecker is the real-life model that was used to create Woody Woodpecker. It’s one of the biggest woodpeckers that can be found in the United States, but it’s not quite as commonly seen in Washington.

You can easily identify this woodpecker by the red-flaming crest on the top of its head. It prefers mature and dead forests, where it can be seen foraging for larvae and wood-boring insects.

It likes to feed on carpenter ants but will occasionally feed on fruit, nuts, and grains. It digs big holes in trees, and these holes attract other animals like bats and owls.

Young birds have yellow crowns, while only adult male woodpeckers will have yellow foreheads. The size of the American three-toed woodpecker is between the sizes of the downy and hairy woodpeckers.

Male birds have black backs with messy white barring and yellow foreheads. The yellow crown patch is also present in young birds of both sexes.

Despite the small size of this woodpecker, it has a strong blow, probably because of its three toes. It calls and drums on trees during spring and summer to communicate with other birds.

The black-backed woodpecker is also known as the Arctic three-toed woodpecker. It has a black body with a yellow patch on the crown of male birds.

The white feathers are usually covered in soot, as this woodpecker loves to forage on burned trees. It has a sharp call and can be difficult to identify, as the pattern of the feathers resembles the look of charred trees.

It will feed on wood-boring larvae in burned trees for years.

This woodpecker prefers to live close to pine forests. It has a black body with a white head, and the males and young birds have red crowns.

It likes to forage for larvae and also digs sap wells to feed on the sugary sap.

Unlike other woodpeckers, this one doesn’t dig deep into the tree bark but flakes it to probe into needle clusters. The white-headed woodpecker isn’t particularly easy to find in Washington, but if you’re lucky, you just might spot one among large pines.

The red-breasted sapsucker has a black back with barred wings and a red head and upper chest. The belly is white, and there is a white patch on each wing.

Just like other sapsuckers, it digs sap wells to feed on the sap flowing from the trees and any larvae it can find. Repeated visits to the trees usually damage and even kill them.

Hummingbirds usually follow the red-bellied sapsucker to feed on the sap from the sap wells.

The Williamson’s sapsucker likes to feed on insects and sap. The males and females look quite different from each other, so much so that ornithologists initially believed them to be completely different species.

This woodpecker prefers to live in pine forests. It also likes to feed on larvae, fruit, and plant matter.

The red-naped sapsucker has a black and white body with a red cap, nape, and throat. The chin is red in males and white in females.

This bird likes to dig sap wells to licking up the sap and catch any larvae that might be residing in the tree bark. It usually resides in the eastern half of Washington.

Unlike other woodpeckers, it produces slow and irregular drumming.

Known to be quite different from other woodpeckers, this one has a pink belly, gray collar, and deep green back. It forages for larvae and eats nuts, but it also flies to catch insects while they’re flying. It has rounded, strong wings that make it fly like a crow.

Lewis’s woodpecker can be occasionally found in Washington during the mating season. It likes to store nuts and acorns to eat them later.

In most cases, the best way to attract woodpeckers is to leave dead trees alone, so long as they don’t pose a threat to you or your home. You can also fill your bird feeder with suet, and these amazing birds just might come to spend some time in your backyard.