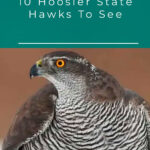 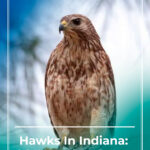 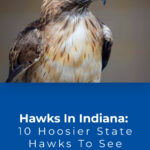 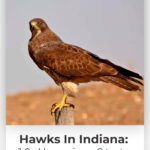 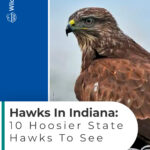 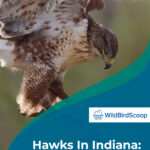 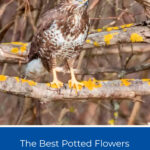 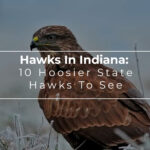 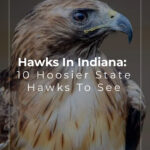 According to Indiana Audubon, the Hoosier State has about 413 documented species of birds. This is a rather huge number, keeping in mind that the state only has a total area of 36,418 square miles.

With such a huge population of birds, it’s no surprise that there are 10 different species of hawks in Indiana. In today’s article, we’ll walk you through a brief overview of each one of these amazing birds of prey!

Red-tailed hawks are easily the most common type of hawk found in Indiana, as well as other states of mainland America — especially the Midwest — with over 2 million hawks of the world’s red-tailed hawk population nesting in the United States.

They represent a typical hawk from the buteo variety, which is why they’re often confused with other species. Among their physical characteristics are broad and rounded wings as well as short wide tails. They also have a reddish brown-back with a pale front with multiple streaks, while the most distinguishing feature of the species is its cinnamon-red tail.

They’re usually most active and regularly seen during the day, but it’s not common to see this species around backyard bird feeders because they tend to feed on larger birds.

Sharp-shinned hawks are known for their sexual dimorphism, which means that males and females are largely different in terms of size, as seen above. In fact, the male sharp-shinned hawk isn’t only the smallest bird of prey in the state, but also the smallest one in all North America.

The bird has dark blue-gray feathers on its back as well as yellow-orange and white bars all over its breasts.

These hawks usually fly in packs during migration and will be easily identifiable due to their small rounded body with small wings and very long tail. The small hawks are also known for lurking around backyard feeders. However, you should always keep in mind that though small, they’re still dangerous, so to protect the songbirds that frequent your yard, you might want to take down the feeder for a few days to allow the predatory bird to move on.

The rough-legged hawk is one of the hawks that migrate to the arctic region in Northern Canada and Alaska during the summer breeding season. However, you can spot them in the midwestern state throughout the non-breeding season in the winter.

These hawks got their name from the feathers that covering their legs all the way to their feet, which is a feature only shared with the Ferruginous hawk and golden eagles. This makes them quite easy to distinguish. In addition to their fully-feathered legs, you can also recognize them by their mottled appearance and the V-shaped wings while flying.

You’ll likely spot the rough-legged hawks perching on utility poles and fence posts as well as the tops of trees as it waits for its prey.

The broad-winged hawks are small to medium birds, but they have noticeably large wings in comparison to their size.

States in the Northern Midwest region, are a breeding-only range for these hawks. During their summer mating season, you can find them in forest areas, but when winter comes, they migrate to Florida and other southern states.

They have a piercing loud whistle and a highly protective behavior around their nests, and in addition to their moniker-inspiring broad wings, these hawks also have a signature reddish-brown head and a thick banded tail.

The red-shouldered hawk is a year-round resident of Indiana. This bird has a colorful body, including warm reddish-brown bars on the chest and heavily black and white checkered wings. It also has a black tail with multiple white streaks.

Red-shouldered hawks are most commonly found in the wooded areas and around rivers and swamps, which is where they can easily snatch one of their favorite meals. They mainly feed on small mammals like rodents, as well as amphibians, reptiles, and other birds.

Swainson’s hawks are known for their reddish-brown chests that lightens as you go toward their bellies. They’re also known for their very wingspan that’s very long relative to their length.

They feed mainly on Indiana’s insect population, especially grasshoppers, which is why they’re also called the “grasshopper hawk.”

You can find the medium-sized hawks perching on fence posts and telephone lines in the northern region of Indiana, which is usually around the spring and summer. They have a significantly long migration range, too, as the social raptor migrates in large flocks to Uruguay and Argentina.

If you’re up for a challenge, the northern goshawk is more than willing to give you one! These birds are extremely scarce throughout Indiana, and you can only find them in the thickly wooded regions of the state’s forests. Should you find these birds, it would be wise to keep your distance. They’re incredibly protective of their nests and will likely attack anyone who comes too close.

Northern goshawks have characteristic slate or matte gray heads, a notable white line swooping backward on their faces, and bright red eyes. Their diet mostly consists of insects, smaller birds, mammals, and the dead flesh of other animals.

Cooper’s hawks are extremely similar to sharp-shinned hawks, although they’re a little bigger in general. They’re also characterized by sexual dimorphism, so the females are larger and more dominant than males.

Adult Cooper’s hawks are known for their warm reddish bars on their front and the steely blue-gray back. They also have distinctive stripes on their tails, which along with the less diffuse bars on the underparts and their large size, make them distinguishable from sharp-shinned hawks.

Cooper’s hawks feed almost exclusively on other birds, so they can usually be found lurking around bird feeders and backyards in general. Although they can even nest in suburban areas, you’ll have a better chance of spotting their nests in wooded areas.

Northern harriers are the only harrier variety found in North America. Their breeding range can be as far north as Canada, however, they prefer the relatively warmer climate of Indiana during winter.

Despite being genetically classified as hawks, harriers have similar characteristics to owls as well. They depend on their heightened sense of hearing and their extraordinary vision to hunt down their prey. Once the hunter catches its prey, the harrier drowns its prey, which shows the birds’ high intelligence level in comparison to other species. Because of the unique way this harrier hunts, they can typically be found around open fields, marshes, and riversides.

The last hawk on our list is the ferruginous hawk, which is one of the largest hawk species in America. Despite its huge wingspan and large body, it’s quite rare to find these hawks in Indiana because they’re mainly indigenous to eastern states.

While their large wingspan is one of these birds’ most distinguishing factors, you can also recognize them by their white underparts and legs that are fully covered in reddish-brown legs. This bird, along with the rough-legged hawk, is one of only two hawk species to have feathers that grow down to their toes.

Your best chance for spotting on these hawks is searching in the prairies, grasslands, and open spaces where they feed on small mammals and insects, like grasshoppers.

With that said, you now have a complete species list of the 10 different hawks you might come across in Indiana. So if you’re planning to visit the Hoosier State soon, remember to look up and gaze upon the birds soaring high in the sky — you just might spot a hawk or two!