Hawks In Kansas: Try To Spot All 9 Species In This State 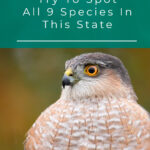 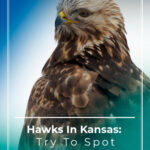 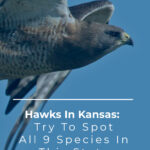 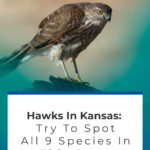 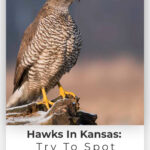 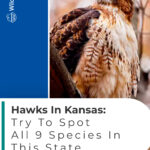 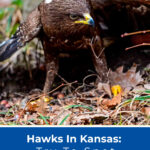 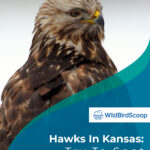 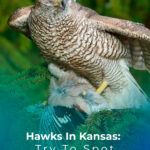 Not only will you find rich history and culture in Kansas, but you’ll also surely find pastures, prairies, and forests in abundance in the Sunflower State. The unique topography is but one reason you’ll find such a diverse range of birds there.

Kansas’s state bird, the western meadowlark, as well as ducks, geese, pigeons, and doves think “there’s no place like home” as they fly about the state, and while each of those feathered creatures is fascinating to observe, we’re focusing specifically on the assortment of hawks found there, too.

There are up to 25 different species of hawks in the United States. Thanks to the country’s distinctive climates and unique food sources, each state has a wide variety of these fierce birds of prey, also known as raptors. Nine of those species live in Kansas, and we’re going to get up close and personal with each one.

Red-tailed hawks are the most common type of hawk in Kansas and can be found in the state year-round. Their numbers increase even further in the colder months when they fly south for the winter.

They’re more active in the early morning hours, when you’ll likely see them perching up high on telephone poles, fence posts, and signs. This is a typical feature of all buteo species.

The color of their plumage ranges from all black to nearly white, so it’s not a reliable distinguishing factor. But look out for their namesake red tail feathers and you’ll spot one of these guys in no time!

Broad-winged hawks inhabit Kansas during their breeding seasons. If you find yourself in the state during the summertime, you just might see this migratory bird heading south in large flocks called kettles.

Broad-winged hawks get their name from the broad dark stripe at the end of their tails, and you’ll also recognize them by their pointed and short wings.

These striking fellows lay up to five eggs per year. The females take over the role of building the nest, with the males lending a hand on occasion.

As far as their diet is concerned, broad-winged hawks hunt a pretty wide range of prey. While they love to munch on small mammals, amphibians, and reptiles, you can also find these birds making a meal of fish or large insects.

Sharp-shinned hawks are the smallest hawk species in North America, but their small size doesn’t take away from the fact that they’re extremely robust and athletic.

Sharp-shinned hawks are swift flyers who are known to ambush their prey, using their high speed to their advantage. Songbirds beware, as these tiny hunters will snatch up any smaller bird with little to no hesitation.

The females are relatively larger than the males. Yet, they both can be distinguished by their short, round wings and long tails—all classic features of an Accipiter raptor.

The red-shouldered hawk is a year-round resident of Kansas, especially along the eastern border. You can find them nesting in wooded areas where they keep to themselves.

The secretive birds build their nests high up in the trees, preferably near a source of water. If you spot one of these birds’ nests in one place, make sure that location is the first place you search for them on your next bird watching excursion, as red-shouldered hawks like to re-use their nests year after year.

Their name comes from the red patches on their shoulders, and their other common physical characteristics include their chestnut-colored bodies, as well as the wide white-and-black bands on their tails and wings.

Cooper’s hawks are typically found in forests and wooded areas year-round. They tend to appear more in the eastern and central parts of the state, where they’ll likely be looking for a medium-sized bird or squirrel to eat for dinner. Keep an eye on the areas of your yard, too, as these birds of prey have been known to linger in backyards around bird feeders in hopes of scoring a meal.

Though they resemble sharp-shinned hawks in their plumage coloration, Cooper’s hawks are larger with a much wider wingspan.

One of their more prominent features is their agility and speed flying. Another of their unique features is that the males are responsible for building the nest. The females just sit back and watch.

Did you know the rough-legged and the ferruginous hawks are the only American hawks that have feathers covering the full length of their legs? This is so these arctic region lovers can withstand the colder temperatures of northern Canada and Alaska during the summer. You’ll find them spending the colder months in the western regions of Kansas, however.

Fully-feathered legs aren’t the only unique feature of these large birds; rough-legged hawks can hover in place when they’re hunting for food. They’re one of only a few raptors that can accomplish this amazing feat.

Just like several other hawk species, you can find the rough-legged hawk in two color morphs. Light morph birds have pale underwings with dark feathers where the wings bend, and dark morph birds are almost completely dark brown, with the exception of their pale-edged underwings.

Northern goshawks are among the largest North American raptors, and when they’re in flight, their long wings look curved. These goshawks are fierce and powerful predators, but they’re also quite handsome with their distinct white eyebrows, dark gray backs, and horizontal stripes.

These larger birds mostly inhabit northern regions, like Alaska and Canada. However, you can briefly spot them during the winter. Their preferred habitats are usually coniferous forests where they set up their breeding grounds.

What does goshawk mean, you ask? The word is derived from the Old English word for “goose hawk,” which makes this name fit this bird-eating creature perfectly.

Swainson’s hawks are commonly seen in the western parts of Kansas. They prefer perching on high signs and telephone poles to scan for food.

These strong hawks inhabit the Sunflower State during the warm months. Then, in September, they migrate south to Argentina 6,000 miles away. That’s the longest migration route of any North American raptor, taking about eight weeks to complete!

These raptors have short tails and long wings, and their plumage is typically reddish-brown with some gray and brown.

Ferruginous hawks are known for their large size, being categorized as the largest hawks in all of Kansas and the largest of the buteos. They’re mainly covered in rust-colored feathers all over their entire bodies.

These raptors can be found along the western border of Kansas year-round and like perching on telephone poles or signs to scan the ground for squirrels or gophers to eat.

These breathtaking birds of prey are found in grasslands and prairies where they can search for food at their leisure and set up their nests away from prying eyes.

The next time you’re in Kansas, be sure to check out its diverse hawk species. Each group has its own distinct set of features that set it apart from the rest. While some are known for their distinct markings, brightly colored feathers, and pointed wings, others boast rounded wings, speed, and agility. Yet, the one thing all these birds have in common is that they’re truly a magnificent breed; you don’t have to be an experienced bird watcher to know that!

Hawks aren’t the only bird species to inhabit the Sunflower State. Woodpeckers can also be seen pecking away, searching for food, and building nests. If you’re interested in finding out more, check out woodpeckers in Kansas for an inside look at these fascinating carvers.