Hawks In Louisiana: 9 Species To Behold In The Bayou State 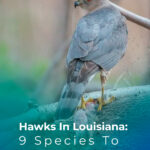 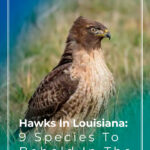 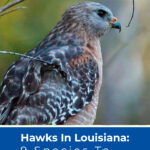 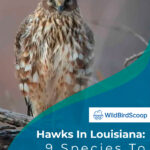 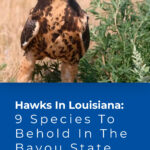 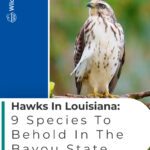 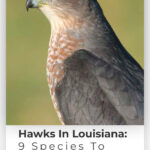 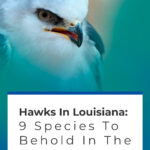 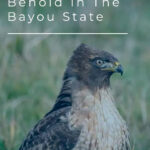 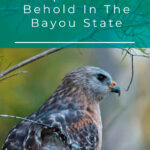 Louisiana has a landmass consisting of 40 percent coastal marshlands and beaches, woodlands, and deciduous forests, so it isn’t surprising that most bird species make their way to the Pelican State throughout the year.

Louisiana’s subtropical climate increases the birds’ attraction to the state and makes it the perfect habitat for an abundance of winged creatures. Today, we’re focusing on hawks and discussing nine of these beautiful creatures found in Louisiana that you absolutely shouldn’t miss. Let’s get right into it!

Along with great horned owls, red-tailed hawks are among the swallow-tailed kite predators in South Louisiana. They’re most commonly seen sitting atop telephone poles and flying over vast fields and forested woods.

Red-tailed Hawks are one of the largest hawks found in this state, and because of their large frames, red-tailed hawks are often mistaken for eagles. They have expansive and rounded wings, rich brown backs, streaked bellies, and short but wide cinnamon-red tails.

These hawks mostly feed on mammals like voles, mice, rabbits, and, on rare occasions, small dogs and cats. If you own a large backyard with a feeder that’s well-loved by small birds, there’s a possibility that they may visit for a quick and easy snack. Should one of these red-tailed birds make an appearance in your yard, take your feeder down for a week or two until the coast is clear.

Red-tailed hawks sound just as most people think a raptor would sound: a thrilling, hoarse kee-eeeeee-ahhrr scream that lasts a few seconds. You’ve probably heard this bird before, as it’s believed that most hawk sound effects heard on the big screen are created by this species.

Swainson’s hawks, like red-tailed hawks, are members of the large-hawk buteo family. Their wings are larger than typical buteos, however, broad and positioned in a shallow V while on air.

Most Swainson’s hawks have chocolate-brown or light reddish chests and brown or grayish underparts. Their wings are lightly lined with white that greatly contrasts their dark flight feathers. Males of this species have gray heads, while females are topped with brown feathers.

Outside breeding season, these hawks are almost always found in big groups. They’re known to be quite social and hang out with their buddies on fence posts, utility poles, and tall trees.

Interestingly, Swainson’s hawk was previously mistaken for the common buzzard until Emperor Napoleon’s nephew corrected the error in 1832.

Swainson’s Hawks were Louisiana’s formerly scarce migrant but have gradually expanded their breeding distribution in the past 20 years or so. Today, they’re often seen migrating from their South American wintering grounds and summer nesting periods from August to October.

Named after the distinct feathers covering their legs, rough-legged hawks are among Louisiana’s few winter raptors. They’re often seen in open areas, including fields, marshes, gulf coasts, and cliffs, all of which are plentiful in the Pelican State. They have boldly patterned, dark-brown or blackish bodies with finely banded tails and prominent white flight feathers.

Rough-legged hawks are distinguished by their single-note, whistling cry that resembles a cat’s keeeeoowwrr-ing mew.

Their diet primarily consists of voles and lemmings, but they wouldn’t say no to the occasional squirrel, gopher, rabbit, and bird. But when winter food shortages strike, they may settle for frogs, insects, and carrion. They watch their prey from high perches before swooping down, talons first, to grab them with their sharp talons, often killing on impact.

Unlike Swainson’s hawks, rough-legged hawks are usually found singly or in pairs.

White-tailed hawks are named after their white, fan-like tail that stands quite strikingly against their dark bodies.

Often mistaken for eagles due to their stocky figure, white-tailed hawks hover or kite while scanning their territories for prey. Once their victim is spotted, these birds quickly drop down and capture their prey in their talons before returning to a perch to enjoy their meal.

These hawks are often found in grasslands, pastures, prairies, and savannas. They mainly feed on mammals, including pocket gophers, woodrats, shrews, and rabbits. However, they wouldn’t say no to different types of invertebrates like crawfish, beetles, grasshoppers, and the like. They’ll even feed on roadkill and rattlesnakes —they’re not picky!

You’ll find these birds in kettles during fall in Louisiana. They fill the sky in hundreds if not thousands at a time, which makes them one of Louisiana’s prime bird-watching attractions.

Similar to many other hawks, broad-winged hawks hunt their prey while perched underneath forest canopies. They’ll happily eat whatever creature is available to them, from chipmunks, voles, and shrews, to frogs, lizards, and insects.

Sharp-shinned hawks, also known as sharpies, sharpshins, and blue darters, are the smallest hawk of the North American accipiter family.

They’re no bigger than an average American kestrel and can be seen frequenting backyard feeders in Louisiana during winter.

Adult Sharp-shinned Hawks have blue-gray crowns, barred rufous underparts, and white undertails. They’re often mistaken for Cooper’s Hawks because they both share a striking resemblance. However, compared to Cooper’s hawks, the sharp-shinned birds have smaller heads, tinier feet, and a more squared-off tail.

They’re most easily observed during migration in Louisiana’s coastal and inland watch sites as they tend to be quite secretive, especially during the breeding season.

They’re one of the most common raptors found in Louisiana. Residents may even catch them feasting on smaller birds at their backyard’s bird feeders!

When in flight, Cooper’s hawks rarely flap continuously; instead, they fly with a flap-flap-glide pattern. They typically attack their prey by either quickly swooping down from high up or flying fast and low to catch them off guard.

Similar to many other hawks, Cooper’s hawks can be found in types of temperate deciduous forests, leafy subdivisions, and foothills of mountainous regions. They also may be found in open woods, scrub areas, and parklands.

Red-shouldered hawks are among the most colorful hawks in the world. Adults often have black-and-white checkerboard wings, warm reddish barring on their breasts, and black tails with narrow white bands.

You can find these hawks in woodlands near swamps and rivers, bottomland hardwood stands, and upland mixed deciduous–conifer forests. You may also find them in suburban and some residential areas.

Red-shouldered hawks’ breeding habitats are often found near water, especially in deciduous and mixed wooded areas. They’re quite monogamous and territorial but won’t attack unless threatened.

You can easily identify red-shouldered hawks by their distinctive screaming kee-aah call. They’re believed to return to the same nesting territory every year, so your chances of seeing the very same hawk you’ve come across several years before isn’t as slim as you might think.

Northern harriers are unlike any other hawks on this list. They have owlish faces, eagle-like bodies, and small, sharply hooked bills. They fly with their wings held in a V-shaped or dihedral manner.

Female Northern Harriers are brown with whitish undersides and tails with black bands, while males have a grey above and whitish below that gave them the nickname “grey ghost.” Both have white rump patches that are apparent while in the air.

Unlike most hawks, male and female northern harriers have noticeably different calls. Females often give a whistled piih-eh, while males have a chek-chek-chek call.

Northern harriers are commonly found in open grasslands and marshes. Their diets primarily consist of rats, mice, voles, and occasionally songbirds, rabbits, snakes, lizards, and frogs. While on the hunt, males fly closer and faster to the ground than females. Much like owls, they locate prey with the aid of their powerful hearing.

Louisiana is a beautiful state that’s home to thousands of wildlife creatures. Hawks are among the many bird species in the Sportsman’s Paradise and can be seen anywhere from swamplands, creeks, and bayous to deciduous forests and woodlands.

If you’re interested to know more about Louisiana’s winged-wildlife, check out our list of Louisiana woodpeckers —you won’t regret it!