The 9 Species of Blackbirds in Colorado You Might See

For many in Colorado, the raucous calls of the native blackbird species are one of the first signs of spring. Many blackbird species migrate to Colorado to nest, and they aren’t shy about letting everyone know it! These lively birds pack a lot of personality. While their behavior may bring to mind members of the Corvid family, like crows and ravens, blackbirds have their own family, the Icteridae.

You might expect that a family of blackbirds would be named for its black feathers, but when it comes to their scientific name, they’re not. The term “Icterid” means “the jaundiced ones,” which sounds none-too-flattering! It refers to the flashy yellow feathers that many members of the blackbird family also have.

In addition to these bright yellow feathers, many blackbirds have extremely colorful bodies, thanks to their natural iridescence. Their black feathers can show flashes of many other colors, including ranges of blues, greens, and purples. These smart and showy birds are a distinctive presence in Colorado, and there are nine unique blackbird species you can see in the state. Let’s get to know them better!

Males have vivid yellow heads and chests that contrast with their sleek black bodies. White wing patches mark the bend of each wing.

Females sport a duller shade of yellow plumage and have brown bodies rather than black.

These birds can make some strange noises–their call has been described as similar to the sound of a chain saw!

In breeding plumage, males are predominantly black, with a yellow ochre nape and white on their backs and rumps.

The Bobolink is the only bird in North America that is white on its upper side and black on its underside.

The males look like the females when not breeding: a warm, tawny body streaked with dark brown on their backs and flanks. They have brown-striped crowns and pinkish bills.

These impressive migrators fly a distance equivalent to 4 or 5 times the earth’s circumference in their lifetimes. They are the only mainland birds known to take a migration route through the Galápagos Islands each year.

The Western meadowlark has bright yellow undersides with a distinctive black V at the breast that turns gray in winter. The rest of the body has detailed patterning in brown, black, and cream. The head is striped in dark brown and cream, and the outer tail feathers look white in flight.

The oldest-ever Western Meadowlark was found in Colorado! It was at least 6 years and 6 months old when it was discovered.

This well-loved bird is the state bird of six different states–but Colorado is not one. Colorado’s state bird is the Lark Bunting, and while it’s a bird with black feathers, it’s not a member of the blackbird family; it’s a sparrow.

Adult males have bright orange bodies with black backs and large white patches on their wings. Their faces are orange, with a black throat and a black line through the eye.

Females and juveniles have a grayish body with a muted yellowish head and tail and white-edged wing coverts. The young males will also display a black throat patch.

Like your favorite toddler, Bullock’s orioles are cruising for sugar anywhere they can find it. They’ll eat fruit, sip jelly mixes, drink flower nectar, and even shoulder their way into hummingbird feeders if there’s a perch handy.

There are, however, specialty oriole feeders you can get to serve them sugar water mixtures directly. They also love orange slices and jelly, so you don’t have to spend money on expensive bird food. Whatever sweets you leave for the orioles, remember to change and clean everything frequently to avoid dangerous mold and bacteria.

The males are striking in appearance, with beautiful plumage on their glossy black bodies and a red and yellow patch on the curve of each shoulder.

These beautiful blackbirds favor a variety of habitats, such as marshy areas, wetlands, and standing water, during the breeding season. Even a small ditch of water can be enough to satisfy their craving for an aquatic oasis! The female prefers to hide among cattails and other types of vegetation rather than showing off the way the male does. 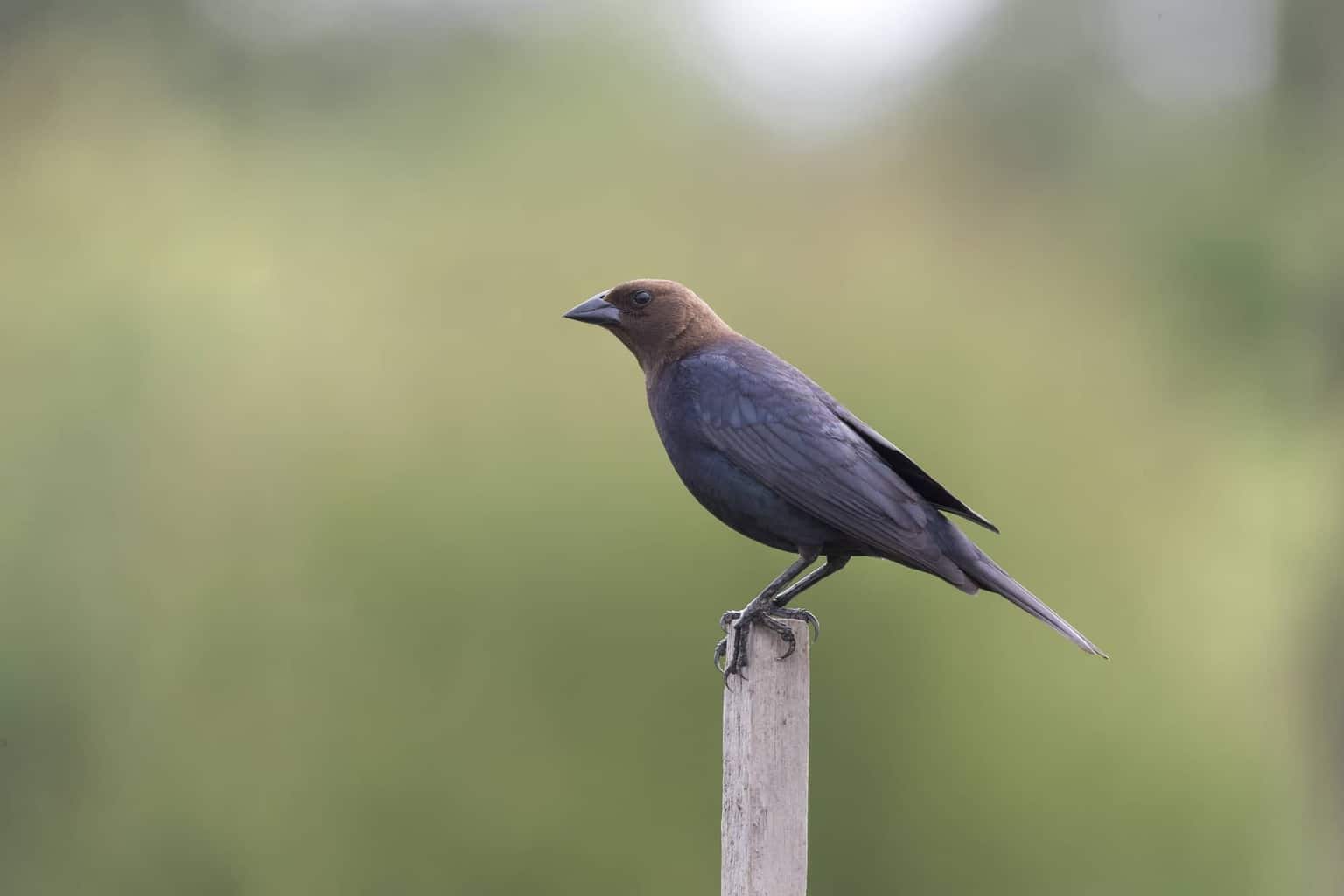 Males have glossy black feathers all over their bodies and a deep brown head that can look black from a distance.

Females are entirely brown, but lighter on their heads and undersides. They have dark eyes and slight streaking on their bellies.

This chunky blackbird’s most distinctive trait is that they are brood parasites: that is, they lay their eggs in other birds’ nests. Then the baby cowbird becomes someone else’s problem without spending energy building nests!

Interestingly, though, not all birds helplessly raise the Cowbird to adulthood. Some species have learned to recognize the intruder’s eggs and created defenses against them, such as puncturing the eggs or building a new nest.

Males are iridescent black, ranging from blues at the top of the head, down to greens lower on the body. They have striking yellow eyes.

Females are brown throughout, but darker on their tails and wings. They have dark eyes. Juveniles will look similar to the females but with washed-out coloration.

If you play the popular bird-themed game Wingspan, you may know that Brewer’s blackbird is named for 19th-century ornithologist and oologist Thomas Mayo Brewer.

Males are black, including their bills and legs. Their feathers are iridescent, and they have vivid yellow eyes.

Females have dark brown plumage, with lighter undersides and a buff-colored throat. They have dark eyes with a stripe above them. The immature birds share the female’s coloration, with streaking on their underparts.

It’s rare for human expansion to help birds, but the spread of urbanization and agriculture is actually helping the Great-tailed grackle grow its range. They are frequently seen living near people in parks, farms, or neighborhood backyards. These adaptable, resourceful blackbirds are now among North America’s fastest-expanding species, gathering together in enormous flocks numbering in the tens of thousands.

Common grackles seem to be black, but iridescence gives them a wide array of colors under the right light. Males have a glossy purple head and a bronze body. Females aren’t as iridescent as the males, but they still have some of that bronzing and multicolored sheen. Both adults have light golden eyes, but juveniles are born with dark eyes.

Common grackles are intelligent, brash blackbirds known for their wide-ranging appetites and foraging skills. Their favorite food is corn, which can cause serious difficulties for farmers, to the tune of millions of dollars annually.

They can be pushy at the feeder, but if you scatter mixed grains and seeds on the ground, the grackles prefer to eat there and may not bother smaller birds at the feeders. Don’t overdo it–excess can draw rodents.

Blackbirds are noisy, bold, and almost too clever for their own good. They’re often getting into trouble with humans, especially for eating food we intended for some other use.

But with their rainbow-like colors, social antics, and high intelligence, it’s hard to dismiss these birds as mere agricultural pests or birdfeeder bullies. Blackbirds have a lot of unique qualities to offer.

If you’re birding in Colorado, you should make some time for blackbirds. One thing’s for sure: they won’t ever be boring!