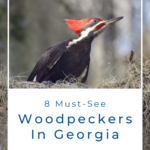 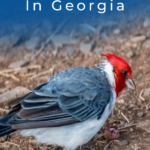 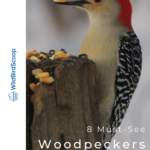 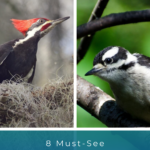 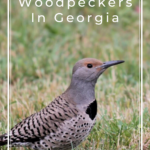 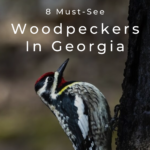 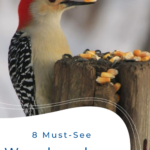 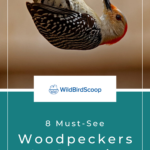 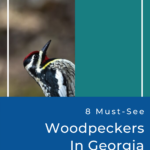 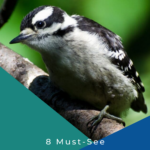 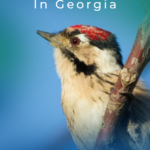 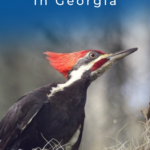 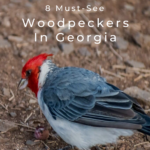 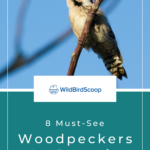 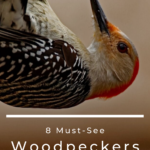 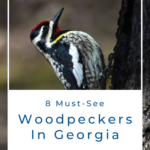 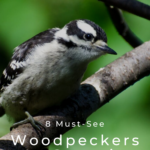 If you’re a fan of nuts, then you already know that Georgia is the nation’s number-one producer of pecans and peanuts. It’s also home to 361 species of birds; 11 of which are rare.

Hiking enthusiasts are in for a treat because there are lots of spots to explore where you can enjoy nature. You’re also likely to see woodpeckers in Georgia, as it’s home to 8 species of woodpeckers.

Only one of them is a snow-bird that visits Georgia in the winter season. In this article, we’ll talk about these fantastic birds.

This is a migratory bird that lives in Canada and travels south in winter.

Female birds have red foreheads, which could be yellow or red in the male birds. Both genders have a bright red crown, which is bordered with deep black feathers.

Males and females can also be differentiated by looking at the throat area, which is red in males and white in females.

The Yellow-Bellied Sapsucker has a brush-shaped tongue that is used to lick sap out of trees. It digs organized sap wells that also attract other animals like bats.

Hummingbirds are also usually attracted to these sap wells that they time their spring migration with the arrival of the Yellow-Bellied Sapsuckers.

This bird isn’t a regular visitor of bird feeders but will visit your backyard if you have a maple or birch tree where it can dig the bark for sap and the larvae that hide inside.

It will occasionally use signs and other man-made objects for its territorial drumming. The beak is strong enough to withstand drumming on metal.

This bird is easy to spot, thanks to its bright red head. It has a jet black back and white belly.

Known for its rather spike-like bill, the Red-Headed Woodpecker is a medium-sized bird that loves to feed on beetle larvae. It also feeds on nuts, berries, smaller birds, and rodents.

It sometimes stores live grasshoppers in cracks of wood or under roof shingles.

In addition to its relatively unusual diet, this bird is also known for its scratchy call. It’s a fierce defender of its territory and will remove and destroy the eggs of other birds.

One of the oldest birds on record lived for 9 years and 11 months.

The barred back of the Red-Bellied Woodpecker, along with its red cap, make it unforgettable. It’s a little more common to find than the Red-Headed Woodpecker that looks close to it but not similar.

The bird has the ability to stick out its tongue 2 inches past the end of the beak. It also has sticky spit to catch larvae from crevices in dead trees.

This bird is commonly found in the woodlands of Georgia, and if you can identify its loud rolling call, you won’t miss it. It will also be interested in visiting your backyard feeder, so keep some sunflower seeds and peanuts to attract this beautiful bird.

Dead trees will also encourage the bird to nest, where it will lay the eggs on the wood chips left from excavating the nest cavity.

Compared to its look-alike, the Downy Woodpecker, the Hairy Woodpecker has a longer bill. It has a rather erect posture and striped head.

It licks the sap from the wells dug by the Yellow-Bellied Sapsucker and will pick into sugar cane to drink the juice.

The Hairy Woodpecker will nest in a living tree if it’s infected by heartwood rot. The nest’s entrance is usually on the underside to protect it from flying squirrels and other animals that might feed on the eggs.

When food is scarce in winter, this bird will come to visit your bird feeder if you have some suet or black oil sunflower seeds. It will also get attracted to the dead trees in your backyard, where it will be nesting.

The Downy Woodpecker is one of the smallest woodpeckers and has a solid black back with a white underside. It also has gray spots on the outer feathers.

Male birds have a strikingly bright red patch on the head. It can be mistaken for the slightly larger Hairy Woodpecker.

This acrobatic bird likes to balance on small branches and sycamore seed balls. It also likes to fly up and down.

If you want to attract this bird to your backyard, you need to fill a feeder with suet, black oil sunflower seeds, peanuts, or even chunky peanut butter.

This bird exclusively prefers old live pines that were affected by heart rot. It digs into the softened bark to look for larvae.

The Red-Cockaded Woodpecker has black and white stripes on the back and a black cap and nape. Red streaks appear on the black cap’s sides in males during the mating season and give the bird its distinctive name.

Due to loss of habitat, this species is currently listed as Near Threatened. The birds live in big groups where younger males help the parents take care of the young birds.

The exact shape of the excavated nest follows the contour of the heart rot. The bird also pecks holes around the nest to leak tree pitch to keep snakes and other predators away.

This bird is larger than most other species of woodpeckers and has a curved bill. It’s also known as the Common Flicker.

The Northern Flicker has a silvery brown body with black markings on the back and wings. The diet of the bird will affect the color of the feathers on the wings and tail, which will usually be yellow in Georgia.

The creamy underside of the bird is covered with black dots or crescents. Male birds have a black mustache stripe.

Unlike other woodpeckers, the Northern Flicker will look for food on the ground. It searches for ants and larvae all year long by sticking its long tongue into ant colonies.

When it’s not on the ground, it will rest on horizontal branches and might feed on nuts, seeds, berries, and grains. It also likes to eat beetles, moths, flies, butterflies, and snails.

It likes to bang on objects for territory defense and communication.

The Pileated Woodpecker is the real bird that inspired Walter Lantz to create Woody Woodpecker, the famous cartoon character. It’s a large woodpecker that has a black back with white stripes and a red triangular crest.

This bird will always be drumming on dead trees to look for carpenter ants, leaving rectangular holes in the wood. It can also feed on spruce budworms, caterpillars, grasshoppers, and wood boring beetle larvae.

The holes left by this bird can be too broad and deep that they can easily break a small tree. Other birds and animals will also come and feed on the excavations left by the Pileated Woodpecker.

The bird is usually attracted to larger trees, which represent a lightning hazard to the nesting birds. On rare occasions, it might visit your backyard to feed on suet.

The nests left by the Pileated Woodpecker will attract swifts, ducks, and owls. One of the oldest recorded birds lived to be 12 years and 11 months.

Most woodpeckers are easy to see in Georgia, especially if you keep an eye on dead trees. However, some of these birds are pickier and are more difficult to spot.

In the past, the Ivory-Billed Woodpecker lived in Georgia and was one of the USA’s largest woodpeckers. But the loss of habitat left this bird extinct and hasn’t been found since it was spotted again in Arkansas in 2004.