Owls In Oregon: 15 Species You May Want To Look For 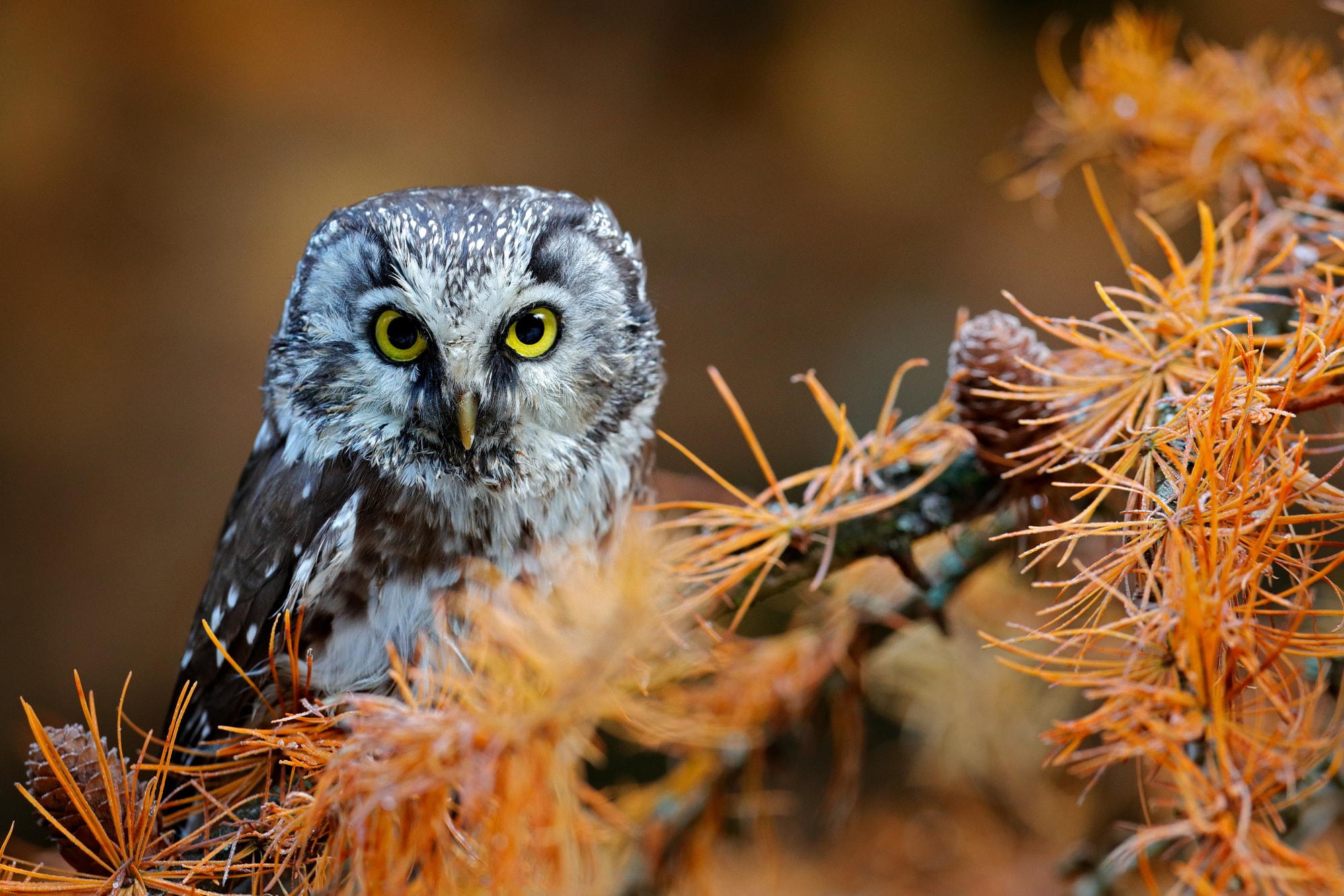 Adults find owls interesting, in part because of their eccentric faces and nocturnal habits. And thanks to Harry Potter, kids are also quite fond of owls. These birds of prey are common worldwide and, luckily, are found in Oregon. The Beaver State is home to around 500 bird species, 15 of which are owls.

Owls live in all of the remarkable variety of habitats available in Oregon, from deserts and coniferous forests to mountains and forests full of deciduous trees.

If you’re an avid bird watcher and you live in Oregon, or if you’re visiting the state anytime soon, you ought to keep reading, as we’re about to cover the 15 different species of owls you should look for in Oregon.

The Barn Owl is an average-sized bird with a heart-shaped face, pale body, and dark eyes. Mostly seen hunting at night and in the early morning, they rely mainly on their strong hearing. Their limited range in diet consists mainly of rodents, which is one of the reasons why farmers love them.

There are many varieties of Barn owls common worldwide, except in Antarctica. Unfortunately, their numbers are decreasing due to habitat loss. The Barn Owl is a permanent resident of Oregon, living all year round in open country and agricultural fields east and west of the Cascades. They like living in abandoned barns, hence the name.

You can distinguish Barn Owls by their distinctive scary screech, a startling sound in these parts. They’re also known to swallow their prey whole, skin, bones, and all.

This species of bird is called the Barred Owl because of the horizontal brown and white bars found all over their bodies. They’re relatively large owls with round faces and dark brown eyes.

These owls are more common in the eastern U.S, but they’ve expanded their range to reach Oregon and they’re non-migratory. They usually hunt by perching, so they prefer living in mature forests and tree swamps.

Great Horned Owls are their greatest threat, although both species live in the same areas. Barred Owls usually move to another area if a Great Horned Owl is nearby.

The Barred Owl’s call is the classic owl call that you hear in many movies.

These square-headed owls are permanent residents of the state. They’re small in size and have white spots all over their wings. Boreal Owls are strictly nocturnal. So, if you want to see the beautiful yellow eyes of this mysterious bird, look for them at night.

They’re called Boreal Owls because their original home is the boreal forests of Alaska and Canada. In Oregon, they nest in Aspen and Spruce tree cavities.

These raptors prefer hunting from perches for a wide range of small rodents and birds. The best time to spot one is during the spring when males call for mates, a common sound in the dense woodland.

Burrowing Owls have brown upperparts with white spots and unique white eyebrows. They have long legs to help them hunt from the ground.

This species is common in Eastern Oregon during their breeding season, but in winter they travel south. Unlike other species, Burrowing Owls nest in underground burrows abandoned by prairie dogs and other animals.

These day and night hunters like to store extra food in their burrows for days when food is scarce.

These are the smallest owls in the state. They have reddish-brown bodies that look like ash-covered logs. Flammulated Owls are hard to spot. This common forest owl is good at camouflaging and prefers foraging for insects at the tops of coniferous trees.

These owls are highly migratory. Their normal winter range is in Mexico and Central America.

Thanks to their large windpipe, they have a low-pitched, deep hoot that makes them sound larger and more intimidating than they really are.

These are the largest owls in Oregon, length-wise, but, oddly enough, they’re very lightweight. Despite that, you can find them breaking through hard ice to capture prey. These silvery gray owls are easily distinguished by their small yellow eyes and the white “X” between them.

You can best spot them at night, or before dusk or dawn when they usually like to hunt. Great Gray Owls like to hunt by listening and watching from perches. Pocket gophers, voles, and small birds make up most of their diet.

Great Horned Owls are the largest owls in Oregon in terms of whole-body mass. With their piercing eyes and intimidating faces, they’re also the scariest. They feed on birds and animals that are larger than themselves.

These predators are well adapted to all habitats. Their diets vary from one area to another, ranging from larger prey, like rabbits, down to mice and frogs.

They’re permanent residents of Oregon and are also found throughout the Western United States and everywhere in North America.

It’s easy to differentiate them with their mottled plumage, reddish faces, and their tufts of feathers.

These secretive owls like to roost in dense foliage and hunt in the black of night in open lands. They’re very rarely spotted because of their camouflage. Long-eared Owls are medium-sized with lanky bodies. They’re dark-colored with distinctive feather tufts of black and orange at the ears, which give them their name. Their long ears make them look surprised.

Similar to Barn owls, these raptors swallow their prey whole. Then, they cough up the undigested parts in the form of pellets.

The Long-Eared Owl is sociable and pretty vocal. They make a variety of hoots, barking sounds, and other noises.

Don’t look for the ears to distinguish these raptors. They’re usually hard to see. These medium-sized owls have brown plumage with buff and white upperparts. Their chests have brown streaks and their distinctive eyes are yellow with black outlines.

Short-eared Owls like to fly low over open areas like marshes and fields when hunting. They mostly hunt during daylight using their acute hearing. They’re usually seen more than heard.

Short-eared owl parents like to nest on the ground. If necessary, they’ll poop on their eggs to draw off predators.

The Northern Saw-whet Owl is one of the tiniest and cutest owls. They’re mostly covered in pale browns and tans with large, rounded heads and prominent white streaks which form a “V” above their eyes.

These cute owls are highly nocturnal and rarely seen. They prefer living in coniferous and mixed deciduous forests at high elevations. They’re one of the most common owls in Oregon forests, especially in the coastal range. They’re found nesting in holes abandoned by woodpeckers.

This tiny raptor is an efficient hunter, staying still on perches hunting for its primary food: mice.

The name “Saw-Whet” is earned by their call which sounds like sharpening or whetting a saw.

These dark brown owls are only found in old forests. Due to loss of habitat and competition with Barred Owls, Northern Spotted Owls are decreasing in numbers.

These ambush raptors like to hunt at night for small mammals. They’re permanent residents of the state and commonly found in the forests of western Oregon.

To distinguish the Northern Spotted Owls, look for round-headed owls with large white spots on their chest and belly. They have a distinctive white “X” between their eyes.

The Northern Pygmy Owl is a small brown owl with white speckles on its head and white spots on its back. They have two dark eyespots on the back of their neck to prevent attacks from behind.

Don’t be fooled by its size and high-pitched calls. This owl is a fearless, aggressive predator. They can take down mammals and birds twice their size.

These small predators are diurnal owls, making them easy to spot. They’re common in forested areas including the Klamath, Cascade, and Blue Mountains.

Northern Pygmy Owls have a taste for songbirds. So, wherever you hear mobbing songbirds, you’ll find them.

If you have ever seen a picture of this amazing bird, you can’t help but adore it. Snowy Owls are the heaviest owls in North America with white plumage and black markings.

These beautiful owls migrate from Canada to spend their winter in the northern United States. And Oregon is blessed to be one of their homes.

Snowy owls are extremely diurnal. You’ll find this major predator hunting for lemmings and other mammals by perching.

Western Screech-Owls are small with semi-square heads, no neck, and short ear tufts. They’re well-camouflaged birds with plumage that ranges from brownish to greyish.

These owls are nocturnal predators, but they can also be seen perching in silence in daylight.

These aggressive hunters are strong predators with a wide prey base that can feed on mammals and birds larger than themselves. They’re also found eating snakes, insects, and lizards.

They prefer roosting in dense trees in woodlands throughout Oregon. They adapt well to humans, so it’s not uncommon to see them living in backyard handmade nesting boxes.

Despite their name, the Western Screech-Owls’ hoot isn’t really a screech. Their hoot is an accelerating quiet trill.

Northern Hawk Owls are rare in Oregon. When small mammals are in short supply, they migrate to the northern United States from the boreal forests.

These mid-sized owls have white facial disks and yellow eyes. Their upperparts are brown with white spots and they have brown horizontal stripes on their bellies.

They look like owls but act like hawks. These raptors hunt by launching from perching into a very fast flight, capturing the prey. They’re diurnal owls and depend on their sight to detect their prey.

Sadly, some of the beautiful owls on our list are endangered, including Flammulated Owls, Northern Spotted Owls, Burrowing Owls, and Great Gray Owls are all Oregon Conservation Strategy Species.

You can help save our owls by donating to Audubon Portland. You can also start backyard feeding to help save other birds.