Hummingbirds in West Virginia: 4 Stunning Species To Look For 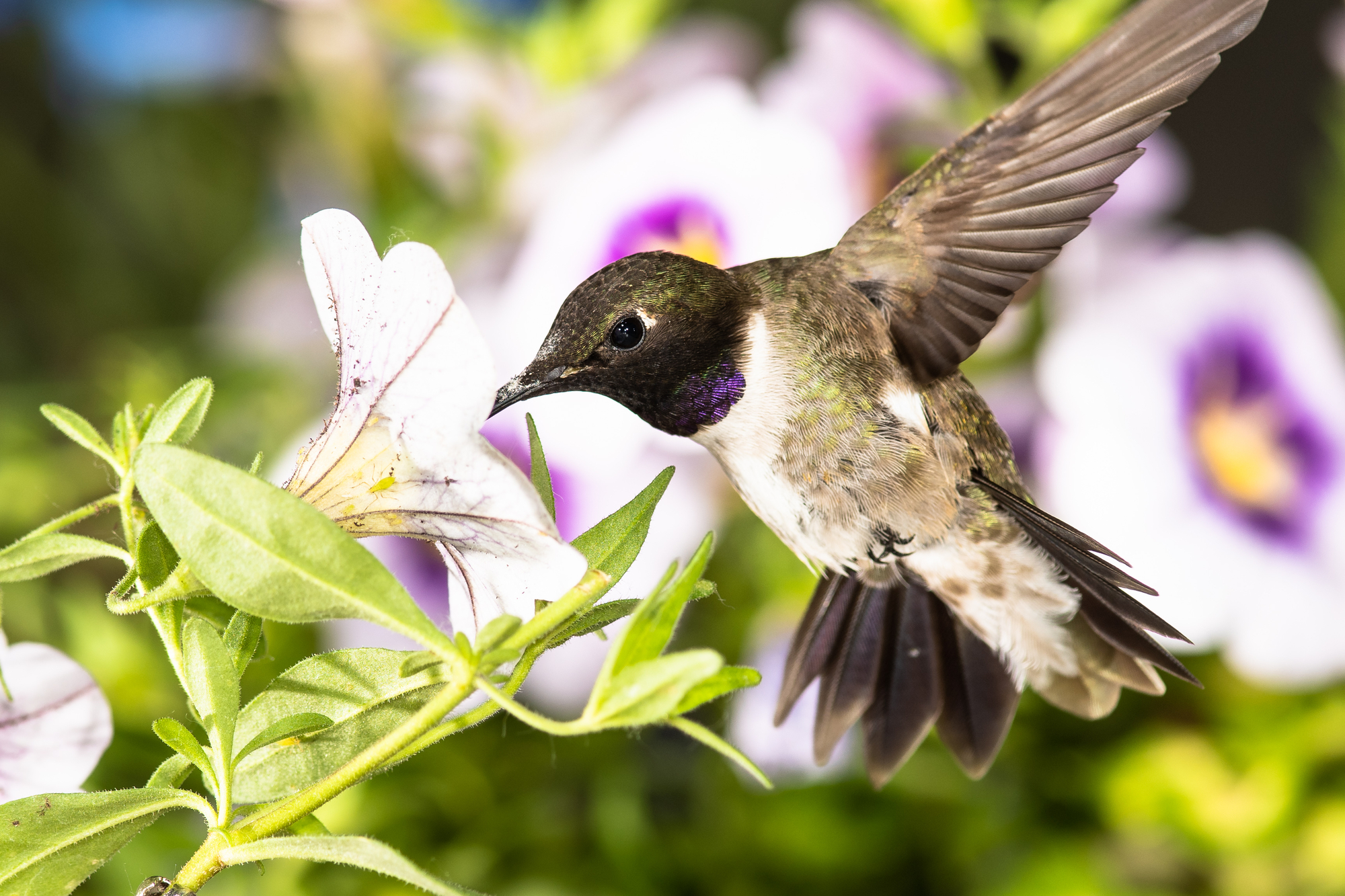 West Virginia is found within the Appalachian Mountain region, getting its nickname, the Mountain State, from its mountainous position.

Its elevation is higher on average than any other state east of the Mississippi River, sitting at around 1,500 feet above sea level.

Nearly 75% of the United States population can access West Virginia within a day’s drive. Even though it is an accessible state, it remains almost untouched, a gem to outdoor enthusiasts.

The state of West Virginia is the third most forested in the United States, with 78% of its area covered by forests. It’s no wonder that it has an abundance of wildlife, including over 70 species of mammals, a significant reptile and amphibian population, and 354 species of birds.

Hummingbirds You Can Find in West Virginia 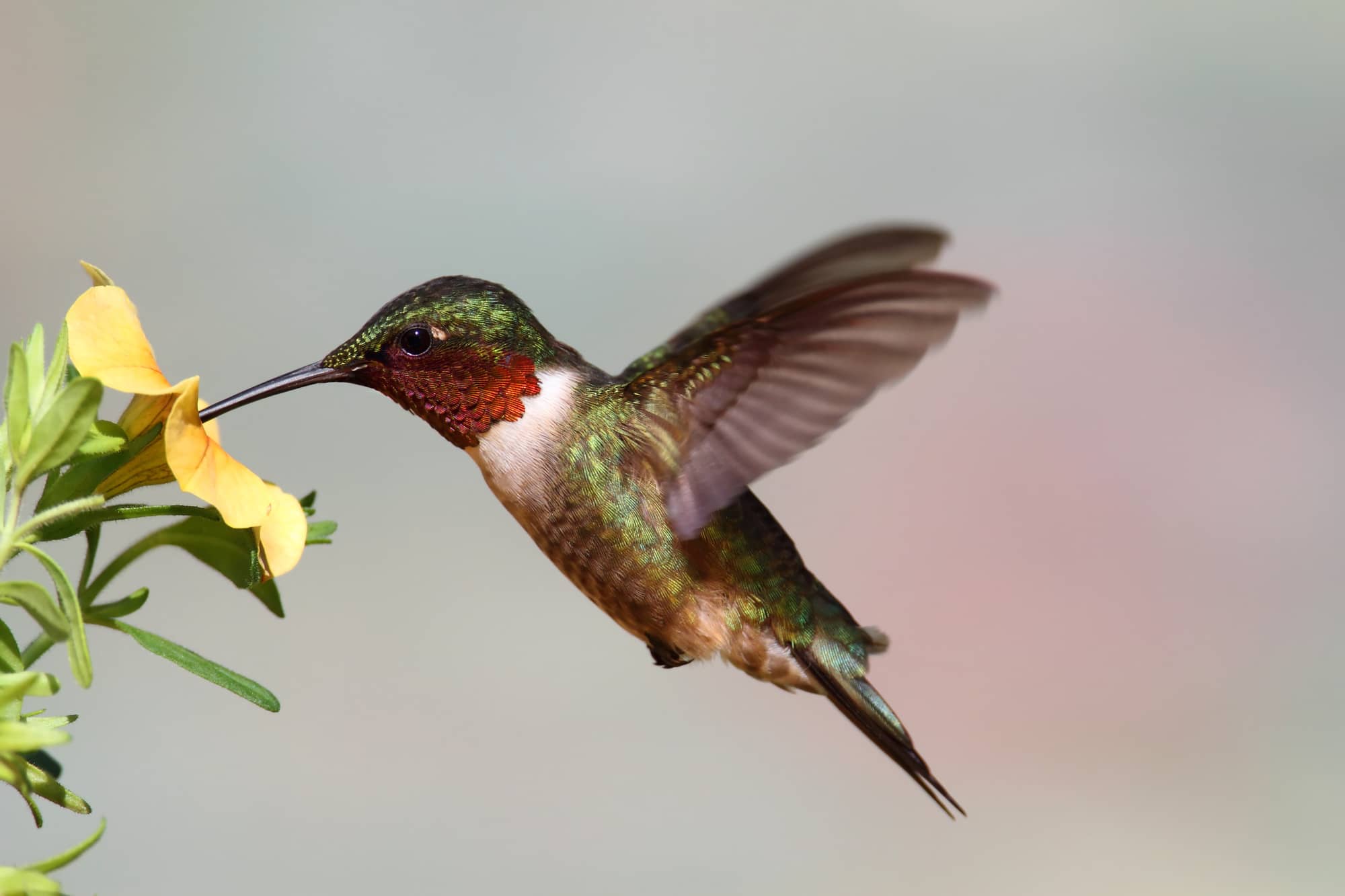 The adult male ruby-throated hummingbird’s distinguishing feature is his iridescent ruby-red throat patch. He has a metallic green back with a white belly, a grey chin, green sides, and a darkly-colored, slightly forked tail.

The adult female ruby-throated hummingbird is slightly larger than the male and has a metallic green back, a white chest and throat, and brownish sides. She has a rounded tail with tips at the ends.

The ruby-throated hummingbird is a native breeder in West Virginia, arriving in April and leaving at the end of September or early October. The males are usually the first to depart, with the females and juveniles following around two weeks later.

These hummingbirds undergo a migratory feat every year when they travel 500 miles across the Gulf of Mexico in one nonstop flight.

To achieve this, they double their fat mass beforehand and expend the entire calorie reserve when food and water are unavailable during the 20-hour flight. 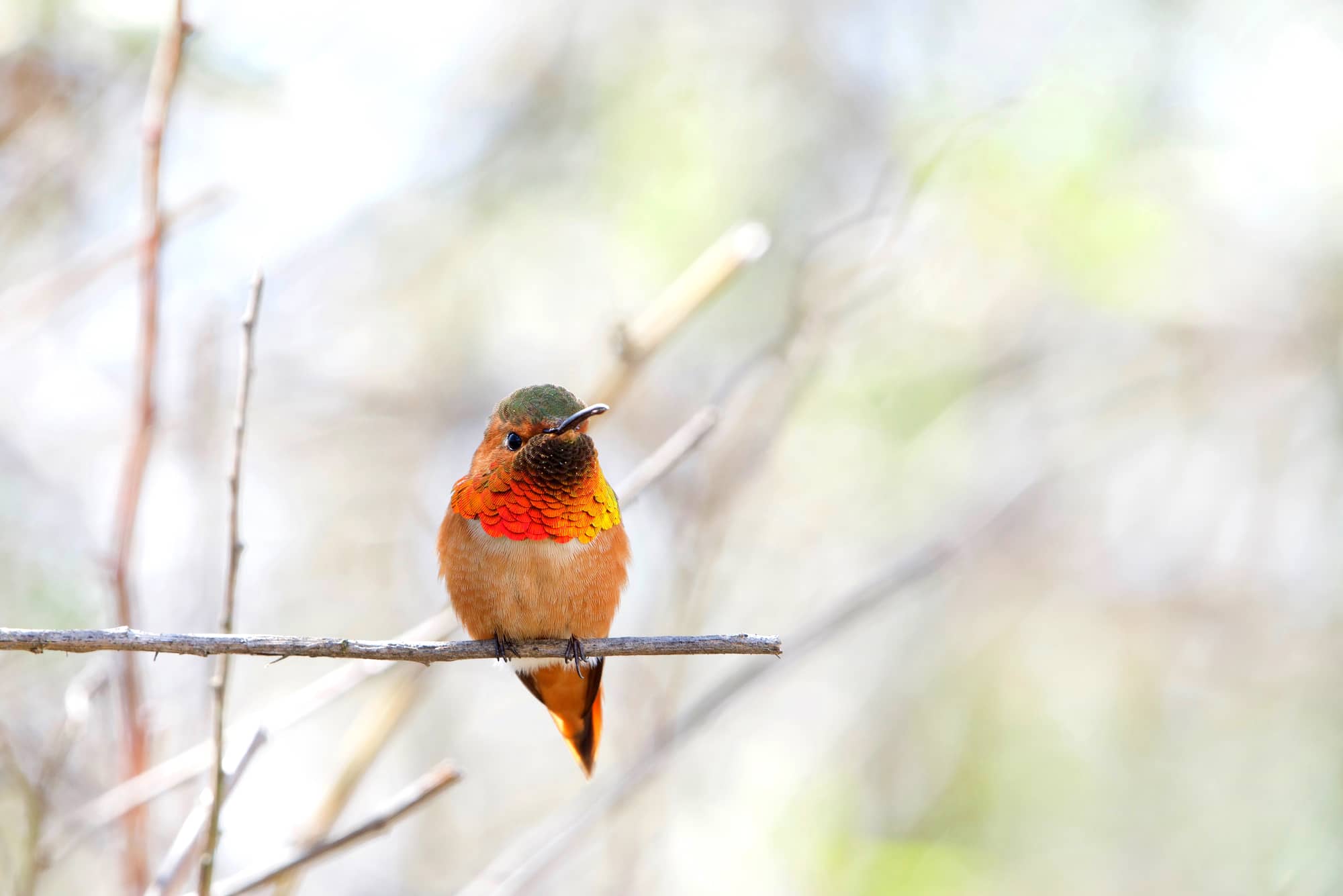 The adult male rufous hummingbird’s most distinguishing feature is his iridescent red-orange throat patch. He has a reddish-brown face, sides, and upper plumage with a creamy white throat, chest, and tummy.

His tail is also reddish-brown but with black tips, and some males have green on their crowns and backs.

The adult female rufous hummingbird has a bronze-green back and crown with some white. Her throat has iridescent orange streaks which gather in the middle of her white throat.

Her chest is whitish, her sides are reddish-brown, and she has white tips on her dark tail.

Although there are records of at least several visitors, the Rufous Hummingbird is a rare vagrant to West Virginia.

The rufous hummingbird is one of North America’s feistiest hummingbirds. They will defend their feeding territories, often chasing away other hummingbirds much bigger than themselves.

As measurable by size, these hummingbirds make one of the longest migration journeys of any other bird. They fly around 3,900 miles one way every year from Alaska to Mexico.

This hummingbird has one of the northernmost breeding ranges than any other hummingbird. They breed as far north as southeastern Alaska. They are also the most common western hummingbird to show up on occasion in the east. 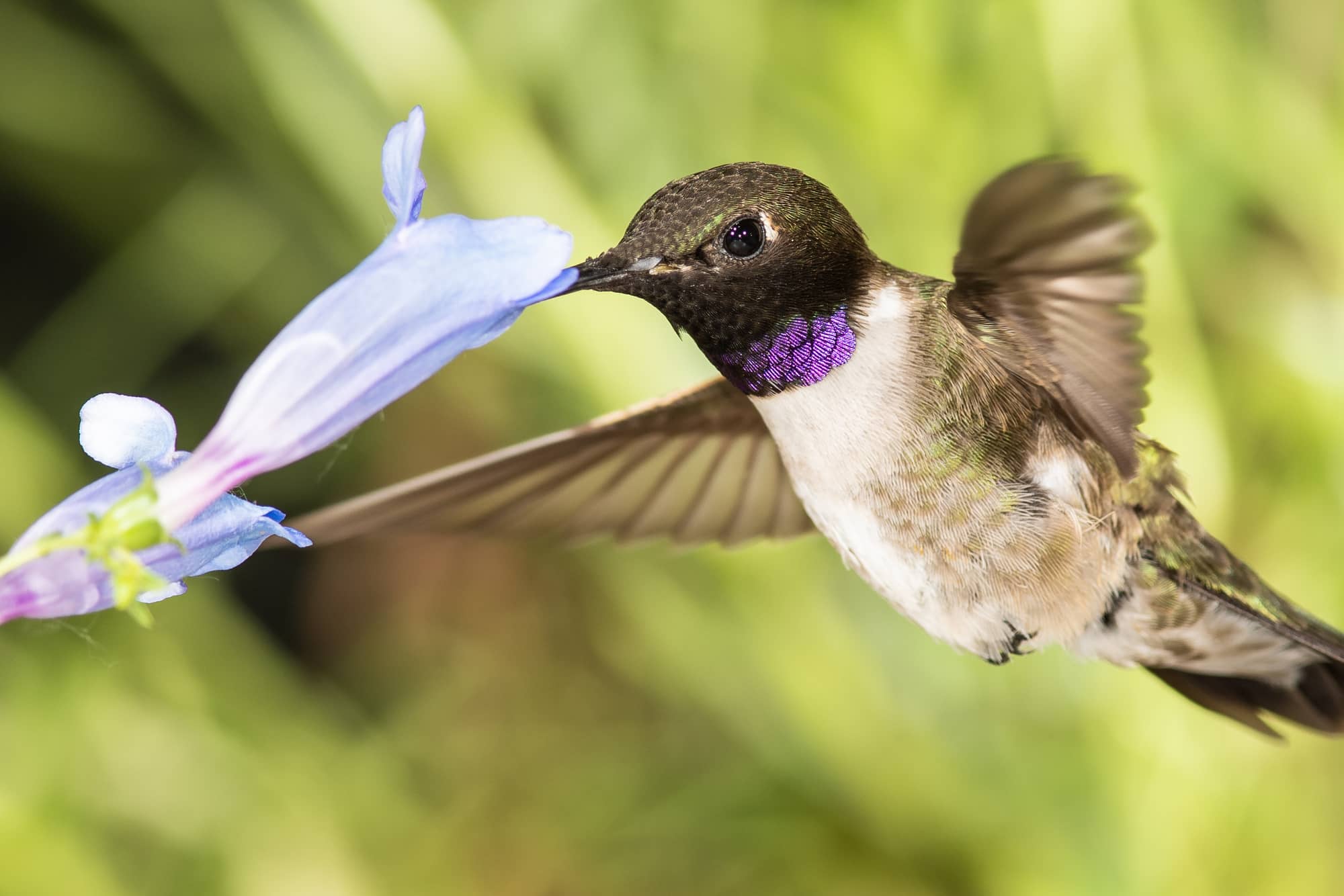 Both the male and female black-chinned hummingbirds have metallic green backs and whitish bellies; their sides are green and have a white spot behind their eyes. Their bills are long, straight, and slender.

The adult males’ distinguishable feature is their velvet black chins and faces, and they have black upper throats with a glossy violet-blue band bordered by white collars. Females have green faces, white chests, and white throats with black spots.

The black-chinned hummingbird is a rare vagrant to West Virginia, with only a couple of state sightings on record.

They are also the most common and widespread hummingbird species in the western United States and Canada. In addition, these hummingbirds are the only species with a black chin with a purple band beneath.

During their courtship displays, the male black-chinned Hummingbird will dive 40 to 60 feet, and as the air passes through their feathers, it produces a variety of tones. They will use this same technique for territory defense.

Black-chinned hummingbirds eat the nectar from flowers, and they will also eat spiders and insects as a source of protein. 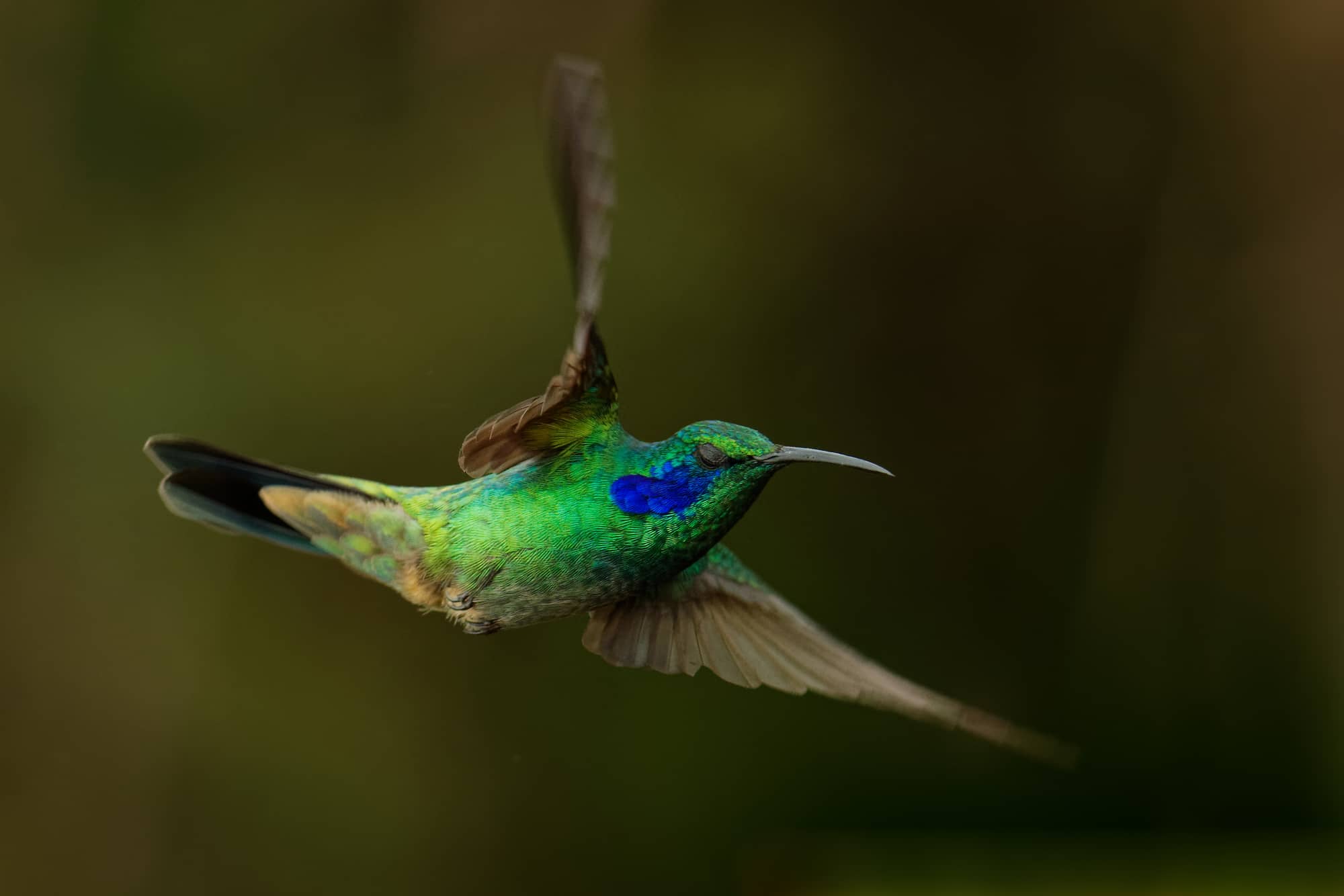 The adult male green violetear hummingbird has a grass-green back which turns to a more bronze coloration on his under tail feathers and rump. He has a slightly notched square tail with a dark blue band at the end.

The adult female has similar coloration to the male, but she is overall smaller and has a duller coloration. Her violet band is also narrower.

The green violetear is a scarce visitor to West Virginia, with only one sighting on record in the state.

Also known as the Mexican violetear, this hummingbird’s usual habitat is the forested areas from Nicaragua to Mexico. It is a rare visitor to the United States, with sighting records in central and southern Texas and other scattered sightings as far north as southern Canada.

Preferring to forage alone, the green violetear will congregate at flowering trees. They feed primarily on nectar and include small insects and spiders in their diet.

West Virginians have an extensive population of bird species, although only four of those are hummingbirds. This list can provide you with more information on other bird species that you can find in West Virginia.