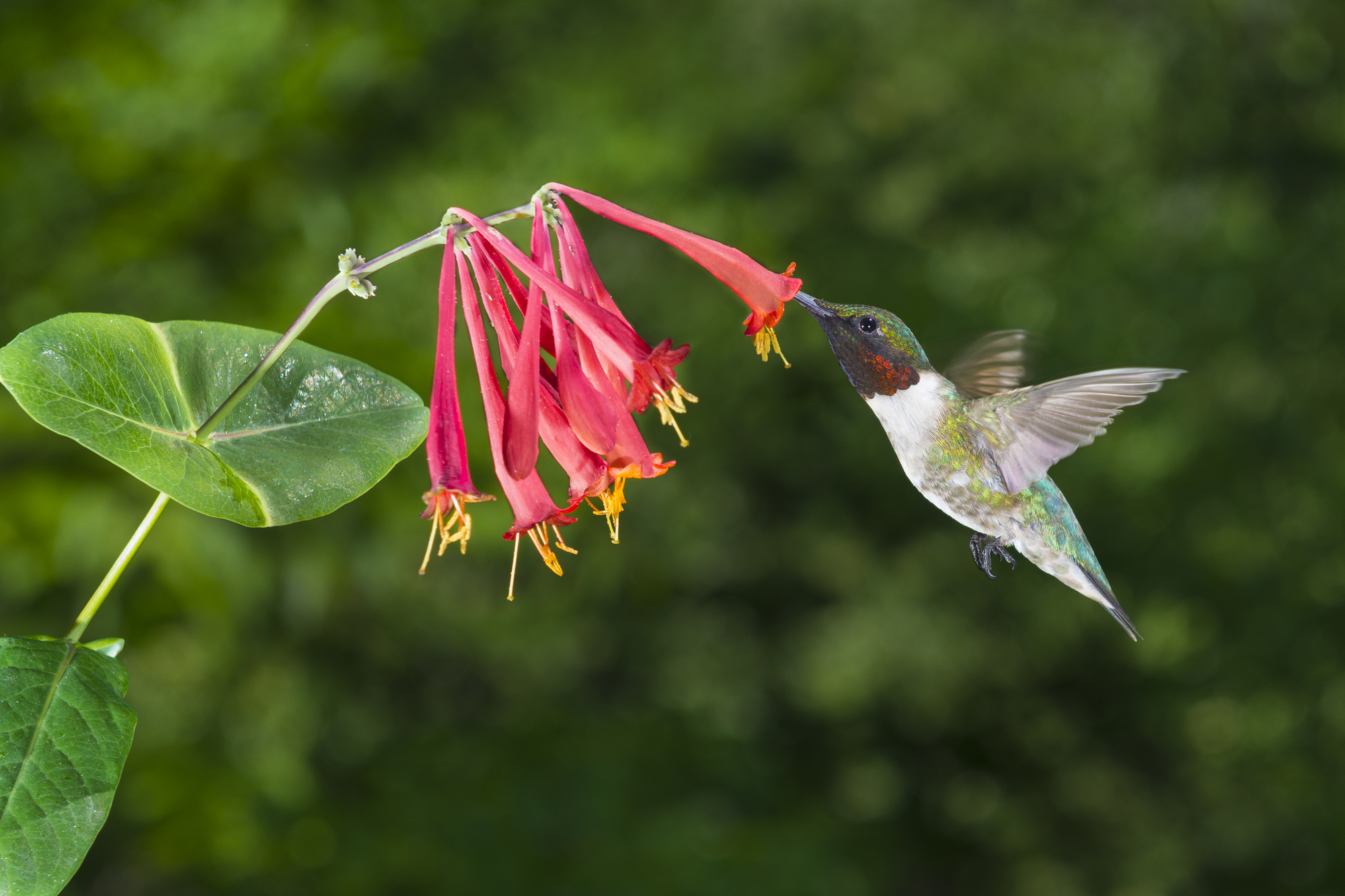 If you’re looking to attract hummingbirds to your yard, you might be on the hunt for tips and tricks to make the process easier. Well, we’re here to let you in on a little secret: hummingbirds love honeysuckle.

Yes, that’s right! Hummingbirds have evolved alongside the tubular, often-colorful, fragrant flowers for thousand of years, so they make a wonderful pair. With that in mind, just what species of honeysuckle is best for attracting hummingbirds to your yard?

There are about 200 different species of honeysuckle, but only about a tenth of them are native to North America. Stick with these!

It’s always best to plant native plants, over invasive species, so you don’t disrupt the local environment and attract unwanted insects into the area. This is true in any case, but especially when it comes to trying to attract hummingbirds.

If you’re wondering which you should plant in your yard, well, it all depends on your location.

Trumpet honeysuckle is native to the eastern United States and is listed by the U.S. Forest Service as one of the top plants for attracting Ruby-throated hummingbirds, one of the most common hummingbirds across much of the country.

Western trumpet honeysuckle, also known as orange honeysuckle, is native to the western United States, as its name implies. Its native range extends from British Columbia down to California, straying inland as far as Montana and Utah.

Also sometimes known as climbing honeysuckle, this vine can reach up to 30 feet long and is pollinated by the Rufous hummingbird, according to Oregon State University.

For those in the southern Great Plains and eastward, coral honeysuckle is a vibrant member of the honeysuckle family, with red tubular flowers and yellow stamen: a perfect combination for hummingbirds. Because coral honeysuckle twines over any nearby foliage, it’s a great flower to plant along a fence or other structure.

American fly (or Canadian fly) honeysuckle is native throughout much of the eastern United States, up through eastern Canada, and inland as far as the upper Midwest of Wisconsin, Iowa, and Minnesota. It’s not as bright and colorful as many other honeysuckles, but its white flowers can still prove to be attractive for hummingbirds.

Arizona and desert honeysuckles are great choices for folks in the southwestern United States. These aren’t delicate plants and can therefore handle harsh desert heat. These strong plants require little water and shade, which makes them ideal in states like Arizona, New Mexico, Texas, and Mexico.

These desert-dwelling honeysuckles don’t sacrifice anything in the color department either with their long red flowers.

That doesn’t mean you shouldn’t plant them, however, as they can help bring lots of biodiversity into your yard, including bees, butterflies, and other insects.

What About Invasive Honeysuckle?

Japanese honeysuckle is amongst the most common invasive plants in the United States, though it’s far from the only one. It’s not the only invasive honeysuckle invasive, either.

The state of Vermont lists Japanese honeysuckle as an “exotic plant species considered to have the potential to displace native plants,” while the Illinois Department of Conservation prohibits its sale, according to the U.S. Forest Service.

It was brought to the United States in the early 1800s for ornamental, erosion control, and wildlife uses, according to Purdue University, but there are plenty of native honeysuckle plants that can accomplish this while flourishing in your chosen location.

I Planted Honeysuckle. Why Isn’t It Attracting Hummingbirds?

It can be frustrating to provide what you think is the perfect food source for hummingbirds and not see results. However, there could be any number of reasons why hummingbirds aren’t flocking to the honeysuckle plants in your yard.

First, question whether you generally see hummingbirds in your yard. If not, it could take a little while for the birds to realize you have planted good food sources.

Don’t worry if planting honeysuckle doesn’t immediately draw them to you. It’s possible that, by the time you planted, they may have already made their way to other beautiful flowers for the first time.

If your yard already has adequate food sources, it may be lacking in some other areas. Hummingbirds also need plenty of covers so they can safely roost and raise their young.

The first step to attracting hummingbirds is planting a full garden, which includes native honeysuckle as well as a variety of flowers. Then supplement their food source with a hummingbird feeder.

Step two is making sure that these teeny-tiny birds also have proper cover and partial shade. Make sure to plant a few taller trees or bushes, and that you have an available water source such as a bird bath or small pond.

Sometimes, despite our best efforts, animals don’t always do exactly what we want them to do. Don’t give up hope of attracting hummingbirds to your yard!

”If you plant it, they will come,” for all the Field of Dreams fans.