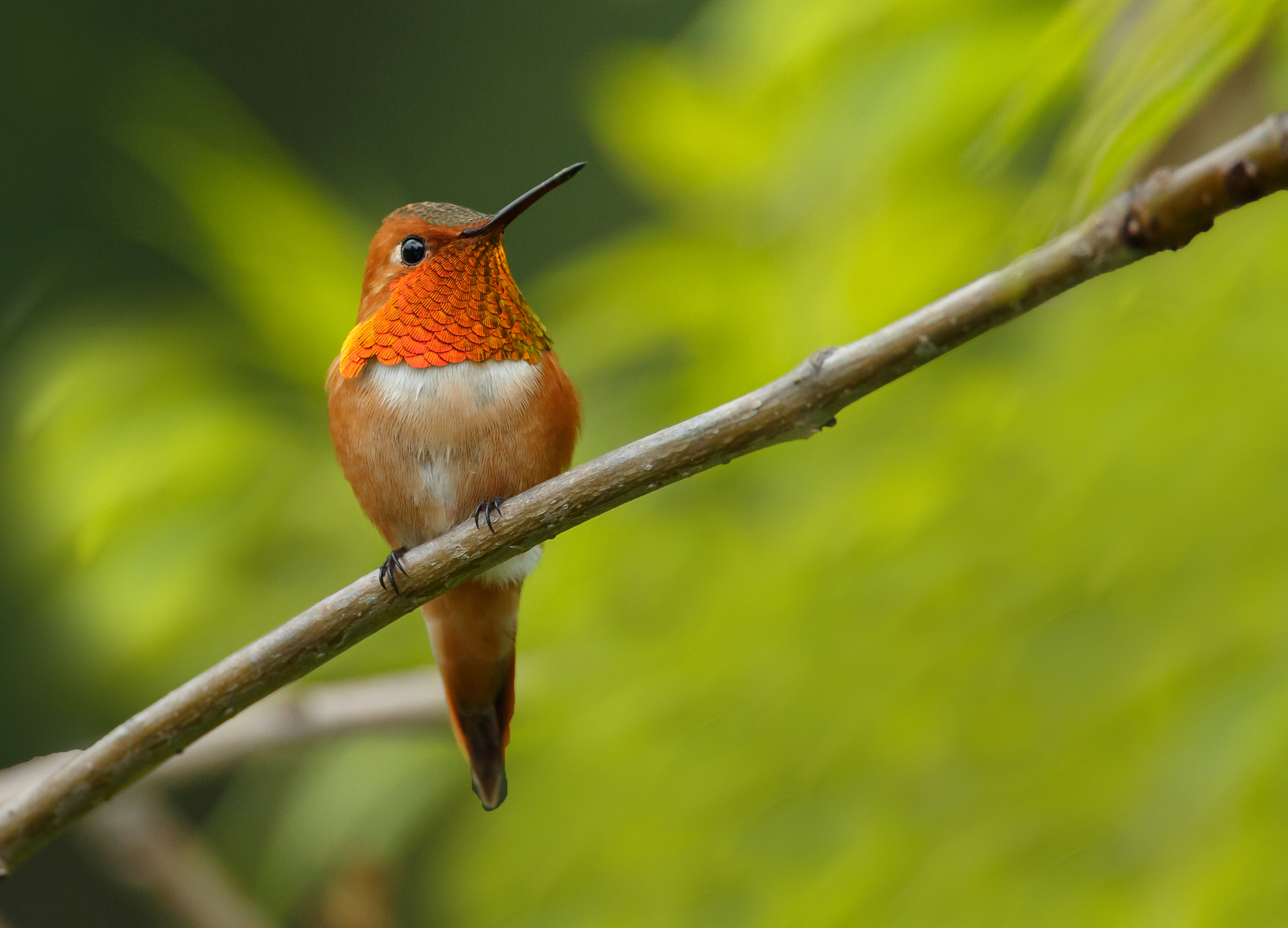 Hummingbirds are a birder’s delight.

These little birds are a special treat to all who enjoy birds, so they’re sought out by many. However, birders in Mississippi do not see many hummingbirds, and therefore wonder which species of hummingbirds are found in Mississippi.

Unfortunately, very few species of hummingbird are native to the State of Mississippi. Only the Ruby-throated Hummingbird is found natively throughout the State.

Other hummingbirds such as the Black-chinned, Calliope, Rufous, and Buff-bellied hummingbirds can be seen occasionally.

Birders in Mississippi typically only encounter one hummingbird species in particular, so it is a rare and special treat when other species are sighted. Let’s uncover the exact species of hummingbirds that are likely to be seen in Mississippi, either seasonally or year-round.

Hummingbirds arrive in Mississippi during the early spring, after spending the winter months in Central America and South America. To attract these colorful birds to your garden, set out well-stocked feeders and clean water every year.

These incredible birds have a fantastic memory and are incredibly loyal. If you provide them with food and water after their long migratory journey, they will return to your garden year after year! 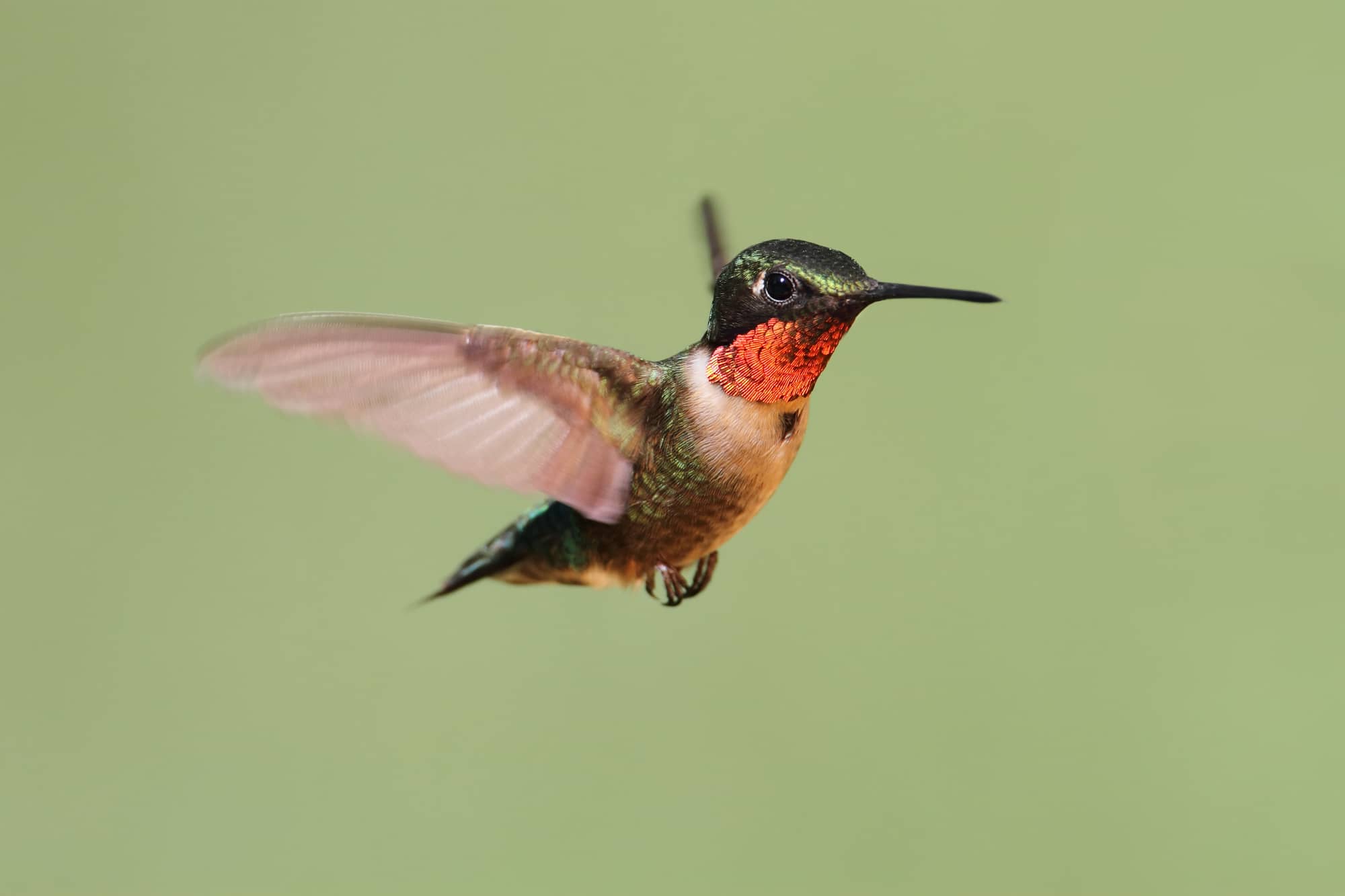 The Ruby-throated Hummingbird is a beautiful hummingbird with mostly metallic green backs, grey-white undersides, and dark or entirely black wings. These birds have a very dark, forked tail, which is a distinguishing feature of the species.

However, males have the most distinguishing feature of the species — a deep, iridescent patch of red on their throats and a horizontal white streak directly below the patch.

The female and juveniles of the species lack this red throat. The female Ruby-throated Hummingbird is also green with black wings and a white underside, but the colors are significantly less vibrant than those of the male of the species.

The females also have dark speckles or patches on their white throat feathers.

The Ruby-throated Hummingbird is about the average size of most hummingbirds. These birds are very commonly found throughout Mississippi and the eastern regions of the United States. You can also spot them in the southeastern regions of Canada and Mexico.

These are migratory birds, but they don’t migrate very far, as they typically remain within these regions, simply migrating further south in the winter months to escape the cold in the north. However, the further north the birds are, the further they migrate.

Some have migrated from Canada to Mexico and even as far as Panama in the winter months. This means that they are far less likely to be spotted in Mississippi in the winter.

The Ruby-throated Hummingbird is territorially aggressive towards other hummingbirds in particular. These birds are primarily solitary, and even courtship between males and females only lasts for a few minutes, compared to the drawn-out courtship ritual of some other hummingbird species.

Some Red-throated Hummingbirds are known to migrate across the Gulf of Mexico during the spring migration.

This means that these tiny birds fly 500 miles over water for 20 hours without stopping. This is an incredible feat for birds with very high metabolisms that constantly require nutrients to survive.

The birds will double their body weight in preparation for this flight and use almost all of their available energy reserves during the single flight.

Red-throated hummingbirds feed mainly on nectar, insects, arthropods, and spiders. These birds consume much of their nutritional intake from flower nectar but receive vital vitamins and proteins from the various small animals that they consume.

Overall, the Ruby-throated Hummingbird is the only species of hummingbird native to Mississippi. 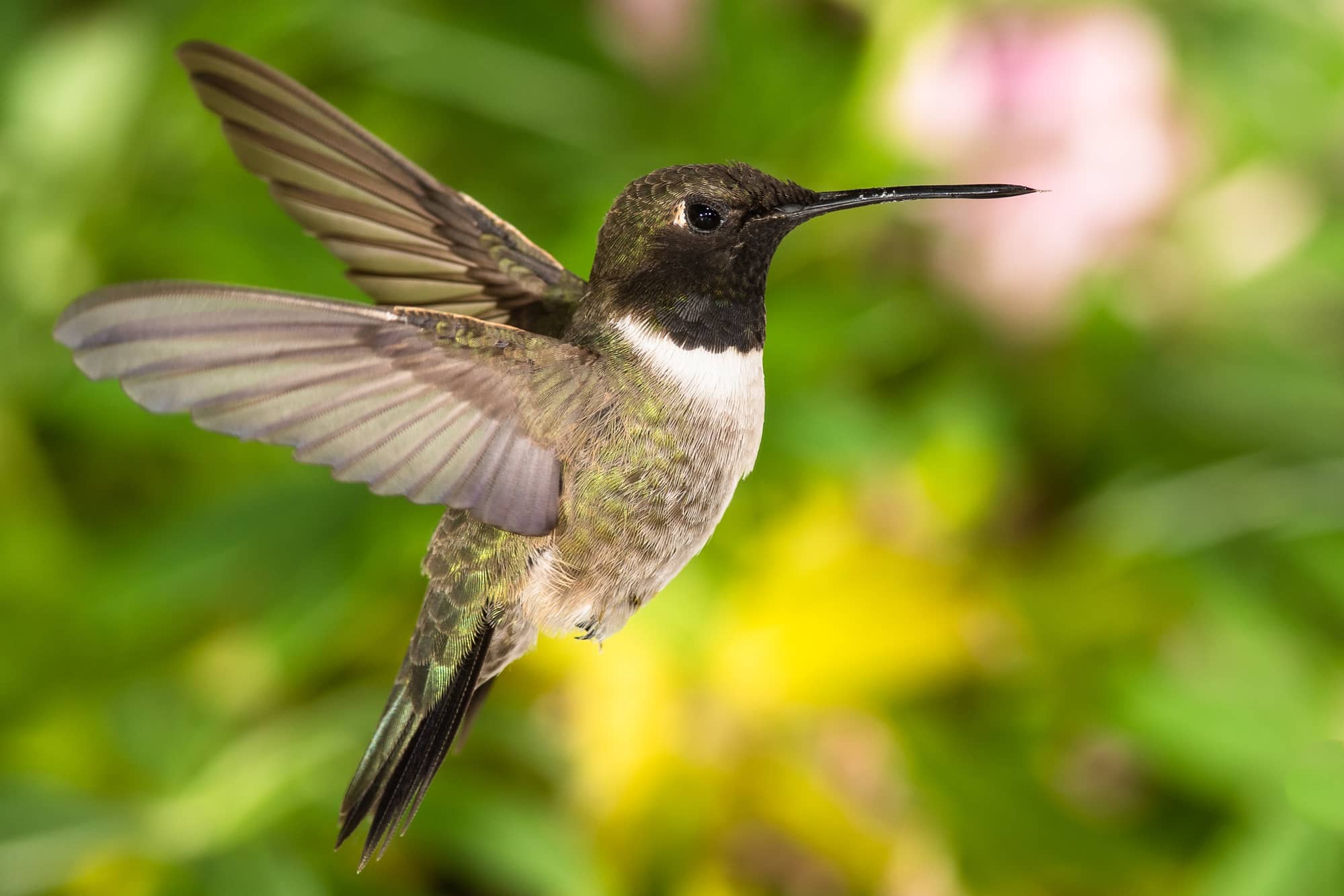 The Black-Chinned Hummingbird is so-called because the males feature a prominent black chin and face. The males of the Black-Chinned species have more vibrant colors than the females, but they are not the most brightly colored of hummingbirds.

Male Black-Chinned Hummingbirds have a metallic green back, a white underside, and green flanks. These birds have a deep purple throat under their featured black chin and a dark forked tail.

The female Black-Chinned Hummingbirds do not feature the namesake black chin nor the purple throat found on males, but their throats and chins have black specs and dots. These birds have mostly white-grey undersides, muted green backs and wings, and a rounded tail.

Juvenile males of this species look very similar to the females, but they develop purple throat feathers very early on, distinguishing them as males.

These birds are relatively new to Mississippi if that can be said.

They are generally native to more eastern regions in the United States, but in recent years their habitat has spread eastward, and they can now be found regularly in states such as Mississippi, especially in the winter months.

Black-Chinned Hummingbirds are not especially territorial. These birds are generally happy to coexist with other hummingbirds, especially birds of the same species, so long as there is enough food to support them all.

Still, even when there is not enough food, these birds are more likely to move on in search of food in other areas rather than fight over one food source.

However, when food is particularly scarce, they have been known to become somewhat territorial until food becomes more readily available. The breeding season also brings out some aggression from these birds, but they are a typically docile species.

These birds primarily feed on plant nectar and eat the occasional insect caught on the wing.

This is one of the most commonly seen hummingbird species in North America and has an extensive breeding area, resulting in a significant population growth each year. This is another reason why their habitat has spread eastwards toward Mississippi. 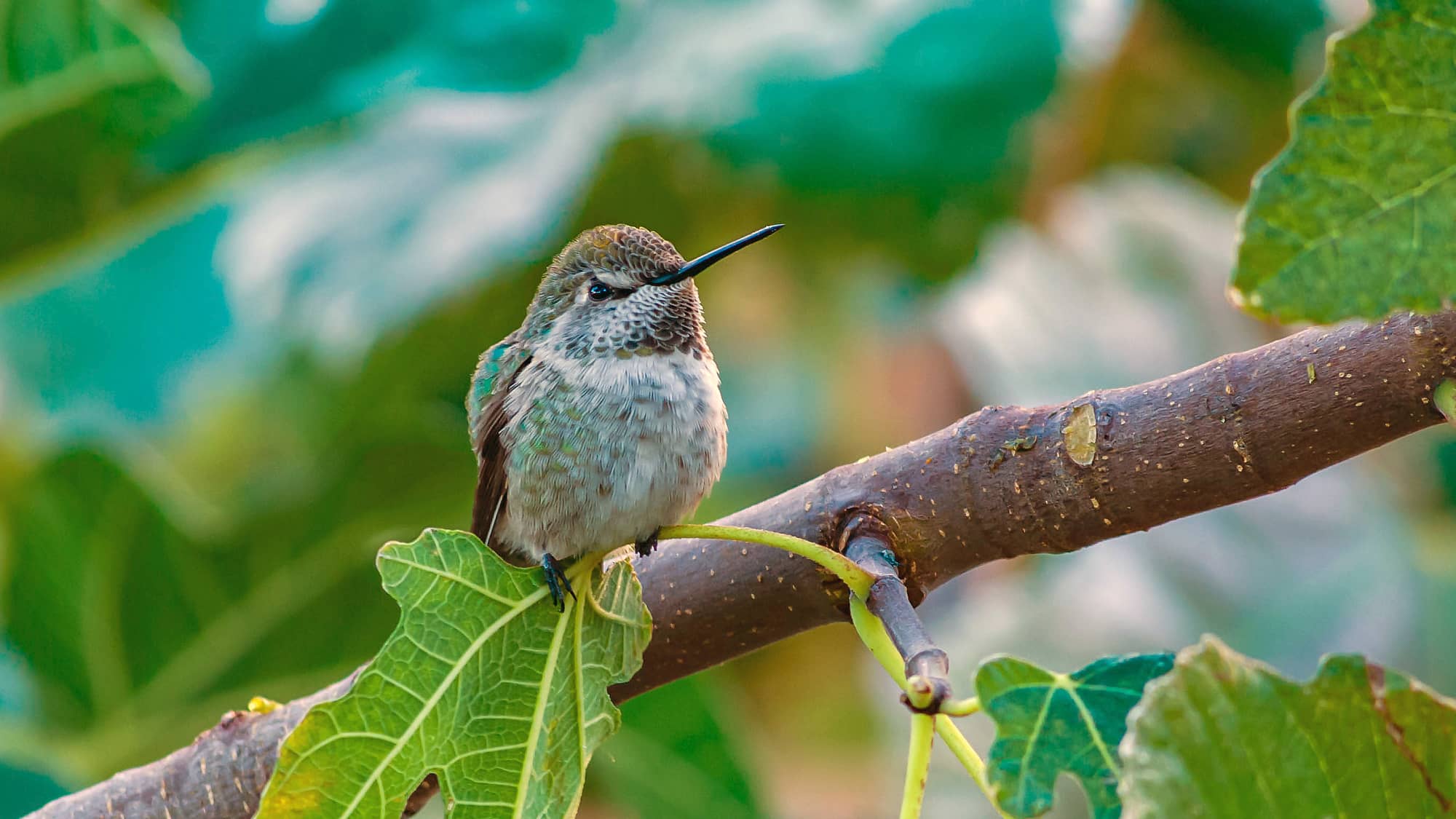 These tiny birds are beautiful. The males of the species feature a bright, glossy green back and crown, green flanks, a dark tail, and wine-red/purple streaks on their chin. These birds also have gentle lilac-colored faces.

The females of the species are larger and much less vibrantly colored. They have similar colorations, but the colors are significantly muted. They also lack the distinctive purple chin streaks of the male Calliope.

The Calliope is the smallest breeding bird in the United States. The fact that these birds are so small makes the range that they are capable of reaching all the more impressive.

These birds are typically found in the western regions of North America and usually in very high-altitude areas. These birds are not commonly seen in Mississippi, but they have been known to make their way there in some parts of the year.

The unusual sightings of Calliope Hummingbirds in Mississippi are indicative of the ever-expanding habitats of most hummingbird species. This is primarily due to human intervention. These birds are becoming increasingly desirable as yard birds and are enjoyed by birders everywhere.

This passion for hummingbirds has led many people to attempt to attract the birds to regions where they may not otherwise be found. The Calliope is a prime candidate for this because of the exquisite looks that this bird possesses.

The Calliope is one of the smallest migrating birds in the world and can cover great distances for such a tiny bird.

The courtship ritual of the Calliope is particularly noteworthy. To attract a female, the male creates a very loud humming noise by beating its wings faster and faster.

Once a female has taken an interest, the male will fly 65 feet into the air and dive down at high speed while vocalizing loudly and buzzing its wings. The features of the bird create three separate and distinctive sounds to further pique the female’s interest.

Food for Calliope consists mainly of nectar and tree sap in the winter months.

These birds are less likely to eat insects and other small creatures than other hummingbirds. However, they are known to eat small insects and arthropods frequently found on the flowers that generate the nectar these birds enjoy. 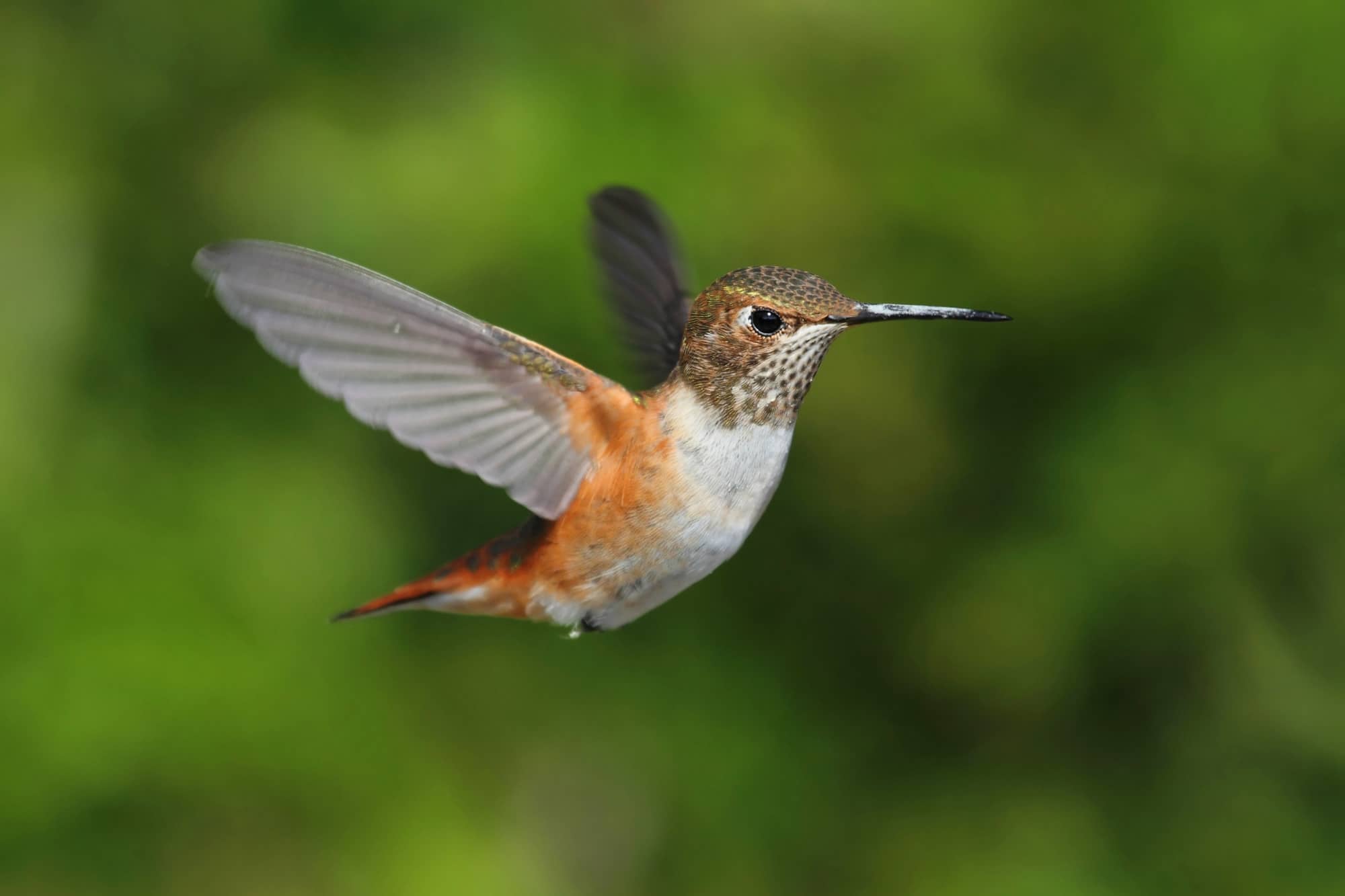 The male of the species features an iridescent orange throat, a rufous face, flanks, and tail which gives the bird its name, and a white underside. Some individuals have green or black patches on their heads.

The female of this hummingbird species is slightly larger and features far more greens, blacks, and browns than the brightly colored male Rufous.

The Rufous Hummingbird is one of the most intensely colored hummingbirds of all. These birds are relatively small as far as hummingbirds go, but they are very distinctive.

These birds are typically seen in Mississippi during migration. Birders in Mississippi consider seeing a Rufous Humminbird in the wild as a special treat. These hummingbird sightings are rare but memorable.

The Rufous Hummingbird is tiny but very aggressive and is known to fervently defend its territory against all species of birds. They are even known to attack and rout significantly larger birds of prey.

These tiny birds are aggressive year-round and have even been known to dive at humans who wander too close to their nesting or feeding sites. 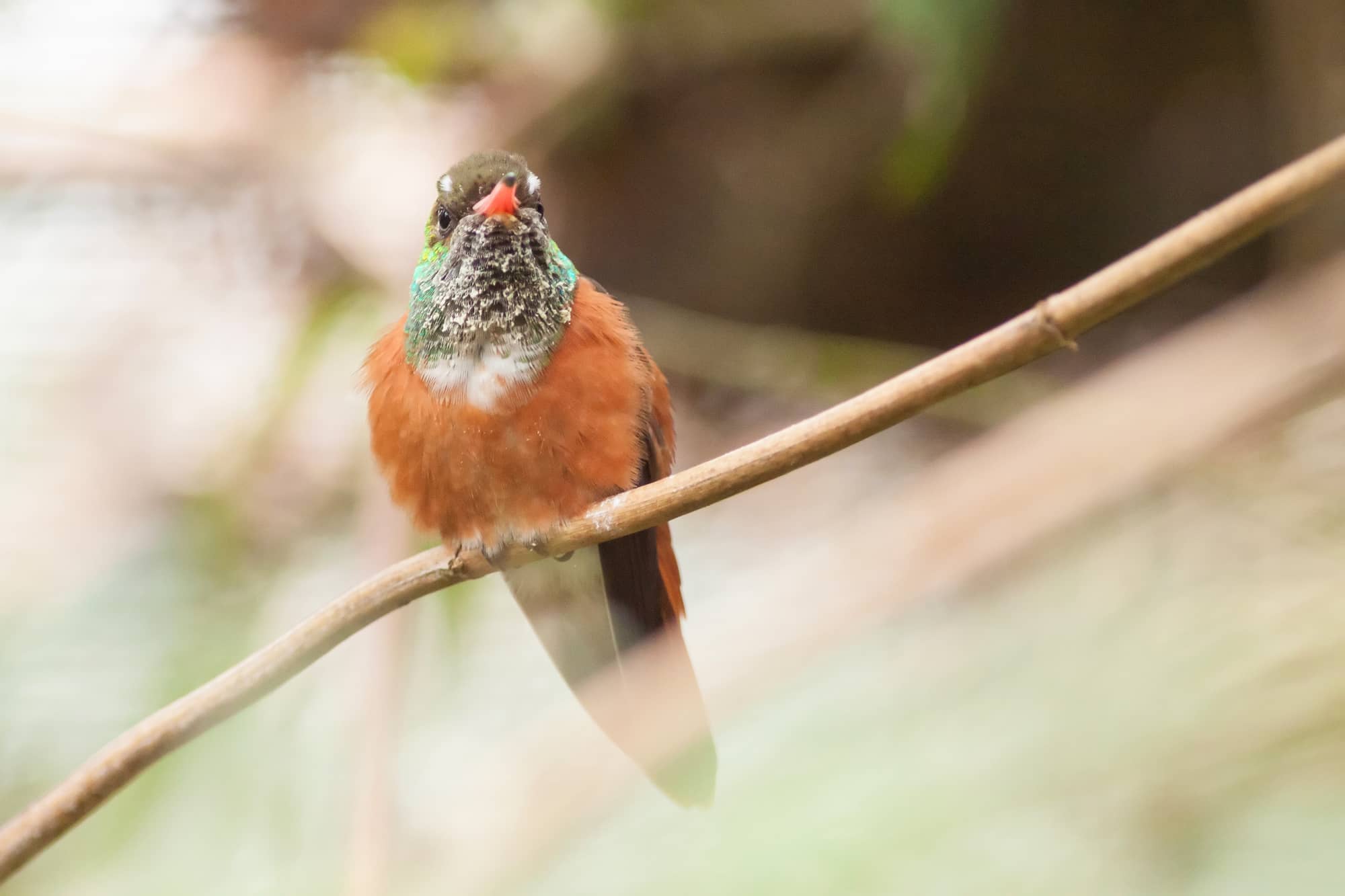 This bird is medium-sized, and the males of the species are olive-green on their backs and flank and have deep purple and light red wings, with darker colors under the wings.

They have light brown to white undersides and a metallic emerald-colored face with a distinctly red-colored beak.

The Buff-Bellied Hummingbird can be seen throughout the southern regions of Mississippi during the winter season. These birds tend to move further south in the summer for breeding.

This means that the Buff-Bellied Hummingbird can be seen in Mississippi for about four-six months of the year, depending on the year’s temperatures.

These birds exist in relatively small populations and have not been extensively studied.

They are more commonly found in southern regions of the United States, but their habitat has been slowly moving northward; it now fringes upon the southern parts of Mississippi.

Like all hummingbirds, the Buff-bellied Hummingbird feeds predominantly on nectar and tree sap but supplements its diet by hunting small insects and arthropods.

Hummingbirds in Mississippi are not in a very diverse supply. The Ruby-Throated Hummingbird is abundantly common in this State, but all other varieties of hummingbird are very rarely sighted in Mississippi or are only seen seasonally or when migrating.

The Ruby-throated Hummingbird is the State’s only native hummingbird and is not as commonly seen in any other State throughout the United States.

Other hummingbird species are finding their way closer to Mississippi due to humans attracting them with hummingbird-enticing plant species.

This means that there may well be more hummingbirds to be spotted throughout Mississippi in the years to come!