When Do Hummingbirds Lay Eggs? Plus, Other Life Cycle Facts! 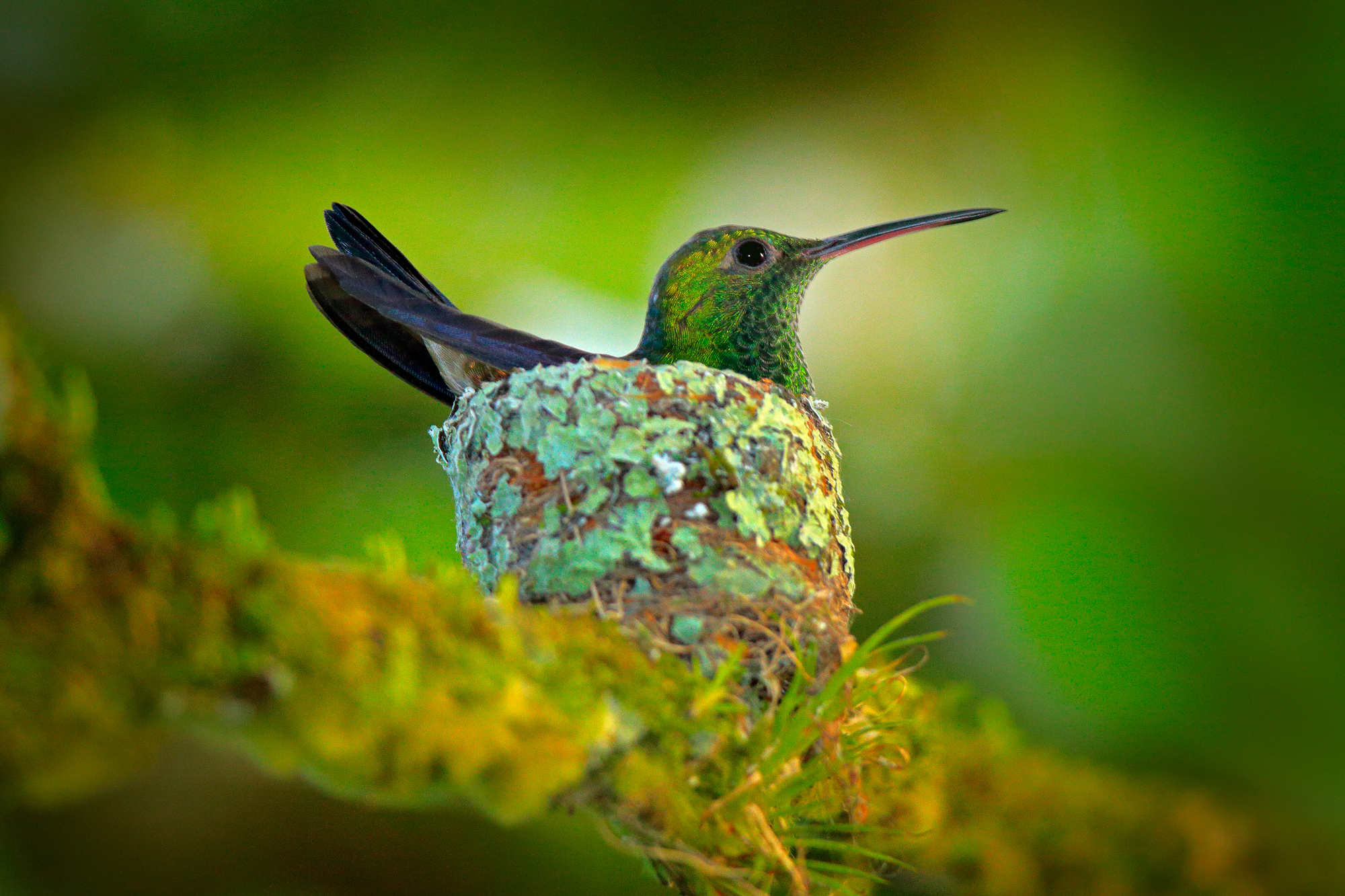 I don’t know about you, but my life would be improved approximately one million percent by the addition of tiny baby birds. When and where can we look for them?

Hummingbirds lay the tiniest eggs in the bird kingdom. In a nest that is only about the size of a house key, a hummingbird will lay two eggs the size of jelly beans.

These insanely tiny eggs are all part of the hummingbird’s packed schedule. Every year they’ve got lots to do, and it’s all got to get done in time with the blooming of the kinds of flowers they depend on.

How do hummingbirds get it all done? When will these tiniest-ever bundles of joy arrive? I need to know!

When Do Hummingbirds Lay Eggs?

Generally speaking, hummingbirds lay eggs in the spring and summer months. Some hummingbird species will have multiple clutches (groups of eggs) per year.

The hummingbirds make a big migration north each spring to stake their turf, mate, and raise their young. All of this comes down to when their favorite food sources become available: nectar-yielding flowers.

Then the female bird arrives, about one to two weeks after the male, and they build their nests solo. Building a nest takes several days. Only when everything is ready will they select a male to mate with.

After mating, the females will leave to lay their eggs a few days later.  They will raise their chicks completely alone, with no help from the males.

Meanwhile, the male hummingbirds will keep patrolling their territories, on the lookout for more females to mate with.

What Month Do Hummingbird Eggs Hatch?

It’s different for each species, but hummingbird eggs hatch about two weeks after they’re laid. Most hummingbirds lay their eggs in the spring and summer.

So that means you could be celebrating hummingbird baby showers anywhere from about March through July. That’s a lot of gift registries!

Some species will breed especially early or late because they’ve found areas with nice, warm weather, and lots of nectar and bugs to support them.

Early could mean as early as February; late could be as late as November.

No. In some cases, they don’t even use the same nest twice in one season! Hummingbird nest materials are pretty delicate, and once a couple of baby birds have grown up in them, it’s just too worn out to be used again.

However, hummingbirds have amazing memories, and they do come back to the exact locations, feeding grounds, and nesting areas year after year.

So they are likely to build a nest near the site of an old one, as long as everything else they need is still close by.

What Kind of Trees Do Hummingbirds Like to Nest In?

Hummingbirds will make use of many different species of trees and shrubs for nesting. Most hummingbirds seem to prefer deciduous trees, but some species prefer conifers.

They like to live on a high rise–from about 10 to 30 feet off the ground. Some species go as high as 90 feet.

Hummingbirds like to place their nests in the forked part of a branch, in a spot that has shelter from lots of leaves. They like to draw on soft fibers from nearby plants to help build their nests, and spider webbing is a critical ingredient to hold everything together.

It’s also a plus if the tree in question is near water because it will help keep the nest cool.

So if there’s a site that brings all of these elements together, you’re likely to find hummingbird nests, possibly even sharing the same tree.

Hummingbirds will sometimes build their nests in unexpected places, like on plant stands, wires, clotheslines, or other man-made objects.

How Long are Hummingbirds Pregnant?

Actually, the plot twist: since birds are not mammals they can’t get pregnant. The word for when a female hummingbird is carrying the developing eggs in her body, after mating and before laying them, is gravid.

What’s the difference? During pregnancy, which happens in mammals, the baby develops inside the mother’s body. For birds and other egg-laying animals, the offspring finish developing externally, which is the job duty of the eggs.

After mating, a female hummingbird is gravid for about 24 to 30 hours. Then she will begin laying her eggs one to two days apart. A hummingbird nest normally has two eggs but may have anywhere from one to three.

Like everything else in their fast-paced lives, hummingbirds lay eggs on a schedule. It’s all about the energy: the availability of nectar and insects decides when hummingbirds migrate, mate, raise young, and make their return trip.

The tiniest eggs in the bird world depend on it!