8 Types Of Woodpeckers In Arkansas 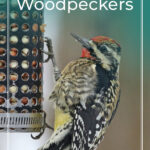 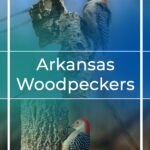 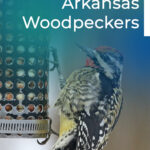 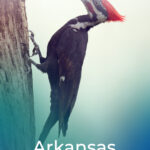 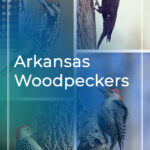 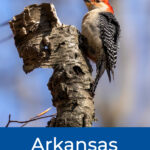 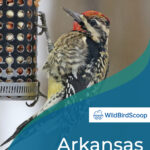 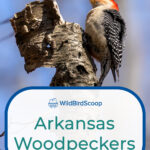 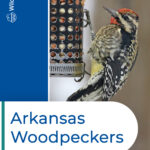 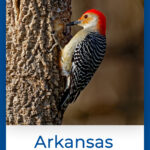 The State of Arkansas is the home to folk music, quartz, fried Catfish, and about 400 species of birds. Although 40 of these species are already extinct, you can still see a lot of colorful birds in Arkansas, including woodpeckers.

This woodpecker is one of the small or medium-sized birds. It’s currently listed as Near Threatened due to loss of habitat, as trees were cut down extensively for construction purposes.

It’s known for the distinctive black and white stripes on its back and the black cap and nape that surround large white cheeks. During the mating season, the male shows a noticeable red streak on each side of the black cap; however, this red stripe might be difficult to identify.

The Red-Cockaded Woodpecker likes to feed on the larvae and adult insects and arthropods found under and on trees’ bark. It prefers to feed on centipedes, termites, wood roaches, and bark beetles.

Birds live in groups and dig their nests in living trees that have been softened by heart rot. Their most favorite trees are live pines, which have been infected with red fungus.

Males stay with the family to help taking care of the younger birds. Females will most likely fly away.

Open stands of old pines are where you will likely find the Red-Cockaded Woodpecker. The cavity of the nest goes up and down to provide the bird with more protection.

The most distinctive feature that sets both males and females apart is the throat. The throat area is white in females and bright red in males.

Yellow-Bellied Sapsuckers feed on the sugary sap of the trees and any insects found in it. The neatly organized sap wells that the bird digs in the trunk on top of or next to each other are a tell-tale sign that the bird is nearby.

It prefers to dig wells in maple and birch trees. You can find this bird by listening to its long mewing calls in the springtime.

The bird is known for its stuttering drumming on trees and metal objects and will be most likely using this drumming as a form of long-distance communication. If you have a bird feeder, you might occasionally see this bird flying in for a quick meal.

The Red-Bellied Woodpecker is often mistaken for the Red-Headed Woodpecker but is more common to find. It has a red cap and a barred back.

This bird sticks the barbed tip of its tongue out and uses its sticky spit to catch the larvae that hide in the crevices of dead trees.

In most cases, the Red-Bellied Woodpecker will store nuts into bark crevices. It will also store other types of food for later use.

The Red-Bellied Woodpecker usually takes over the nests of other birds, including the Red-Cockaded Woodpecker. The bird usually flies quickly and abruptly changes direction.

The loud call of this bird will announce its presence, and it will be attracted to the dead trees found in your backyard. You can also keep a bird feeder with some peanuts or sunflower seeds to feed the bird in winter.

The Pileated Woodpecker is almost the size of a crow and is one of the biggest and most striking birds that you can see in Arkansas. It has black and white stripes on the back and a noticeable bright red crest.

You can see these birds drumming on dead trees to look for their favorite prey, carpenter ants and wood-boring beetle larvae. The Pileated Woodpecker plays a crucial role in protecting trees by feeding on insects that would otherwise harm them in the long run.

You can easily find this bird if you’re in a mature forest with lots of dead trees.

This bird has a spike-like bill, a black back, and a white underside. The bright red head makes the Red-Headed Woodpecker easy to spot, although younger birds have gray heads.

The bird likes to feed on beetle larvae and live bugs like grasshoppers. It also feeds on berries, seeds, acorns, flying insects, smaller birds, and rodents.

It likes to store food in crevices in trees or under the shingles of roofs. The bird will store grasshoppers, corn, grains, and cherries, usually shifting them from one place to another before eating them in the cold months.

The numbers of Red-Headed Woodpeckers have declined significantly due to the loss of habitat and shortage of food supply. It might visit your backyard if you have a suet bird feeder.

It can be quite aggressive when it’s protecting its territory and will often pick the eggs of other birds. In 1996, the USA issued a stamp showing the Red-Headed Woodpecker.

The Downy Woodpecker is one of the smallest and most active woodpeckers. It has a black body with a bright white back, belly, and throat, in addition to remarkable small white spots on the wings.

Bird watchers usually struggle when they try to differentiate the Downy Woodpecker from its larger look-alike, the Hairy Woodpecker.

Adult males show a red patch that grows at the back of the head. This bird announces its presence in the spring by drumming on trees and calling out other birds, and you’re likely to see it in backyards, orchards, woodlots, and parks.

It prefers to feed on insect larvae, ants, caterpillars, and some crop pests. When food is hard to find, it will feed on acorns, grains, and wild berries.

You can attract birds to your own garden if you put suet in a feeder, especially in cold weather.

Arkansas is home to the Yellow-Shafted Northern Flicker, which has a medium-sized body compared to other woodpeckers. The color refers to the feathers on the wings and tail’s underside, which can be red in other states.

The body is grayish-brown with black markings on the back and dots on the belly.

Unlike other woodpeckers, this one prefers to dig through the ground to look for insects. It can also feed on horizontal branches to look for moths and snails, or might look for nuts, grains, and seeds.

The bird likes to stick its barbed tongue into ant colonies to look for larvae. It can also climb trees and look for larvae, just like other types of woodpeckers.

The Northern Flicker is one of the few species that migrate to the south in winter.

When it feels threatened, the bird starts to drum on metal objects or trees. The Northern Flicker is widespread near city parks, suburbs, wet areas, and marsh edges.

This is the third-largest woodpecker in the world. The Ivory-Billed Woodpecker was affected by the destruction of its habitat in the 19th century and was thought to have gone extinct until it was seen again in 2004.

Ever since then, there has been a lot of research trying to relocate the bird.

The Ivory-Billed Woodpecker has black-purple feathers with white lines extending from the cheeks. The crest is black at the front and red at the rear in males, while it’s solid black in females.

Compared to other woodpeckers in North America, this bird has a distinctive flattened bill that looks like a wood chisel. The bills are strong enough to remove the intact bark to feed on the larvae.

Native Americans used the bills of the Ivory-Billed Woodpecker for decoration.

There are lots of exciting things that you can do in Arkansas, and one of them is definitely birdwatching. The State of Arkansas is home to lots of cool birds, and woodpeckers are among the most famous ones.

Although some of the woodpeckers have gone extinct or are extremely hard to find, many of them can still be seen in national forests, refuges, and even in your own backyard if you have a feeder.