Hummingbird Moth vs Hummingbird: Don’t Let Your Eyes Deceive You 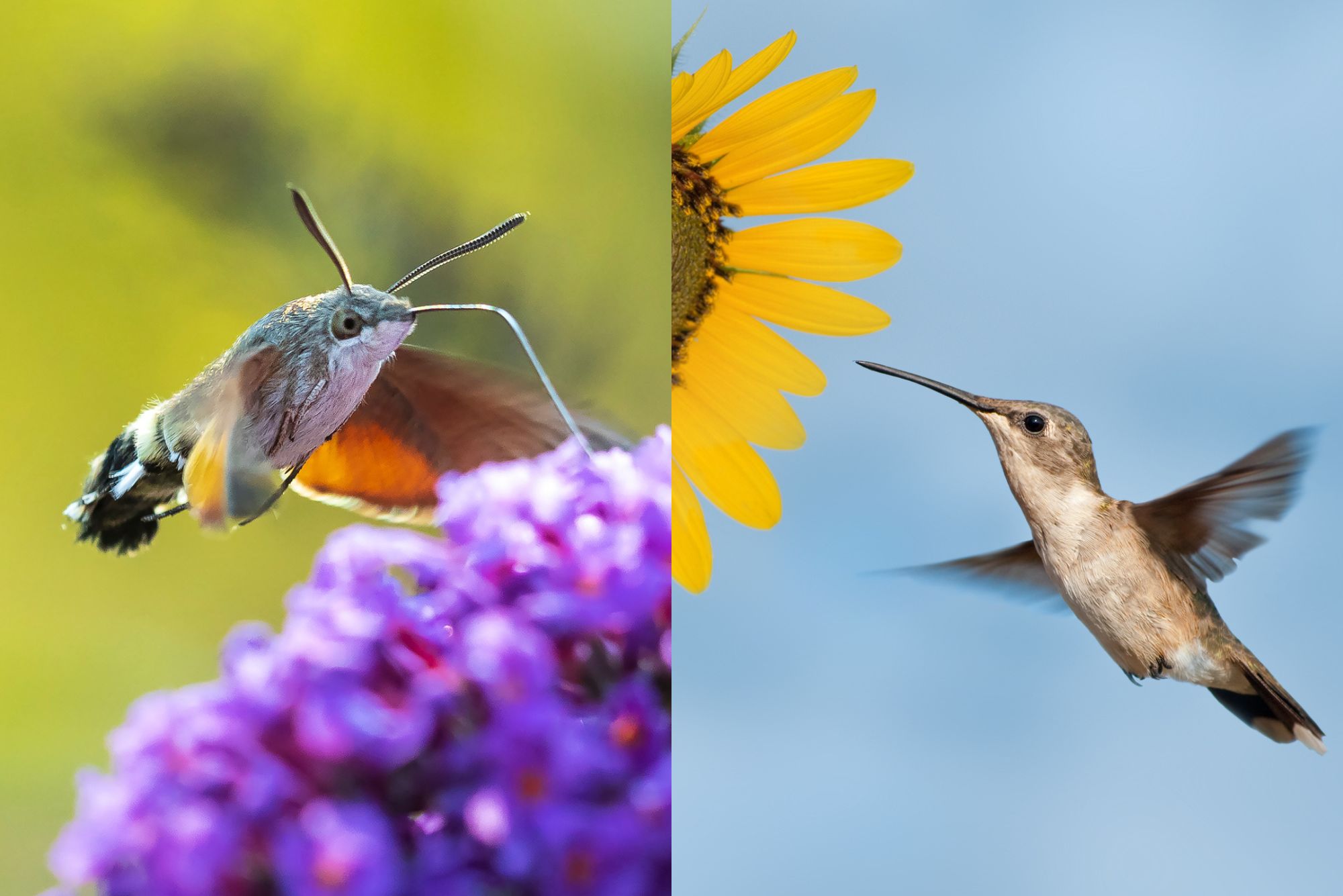 The first time I saw a Hummingbird moth, I was absolutely convinced it was a hummingbird. My eyes got blurry as I stared intently at the strange hovering creature who was not quite a bird and not quite a bug.

It had the same general body shape and size as a hummingbird and hovered in midair like one. Even its wings moved like a hummingbird’s.

Obviously, a moth and a bird are in entirely different spheres of life, so how can they look and act so similar to the point of confusing nature observers?

Let’s delve into both of these impressive creatures and how to tell them apart quickly. 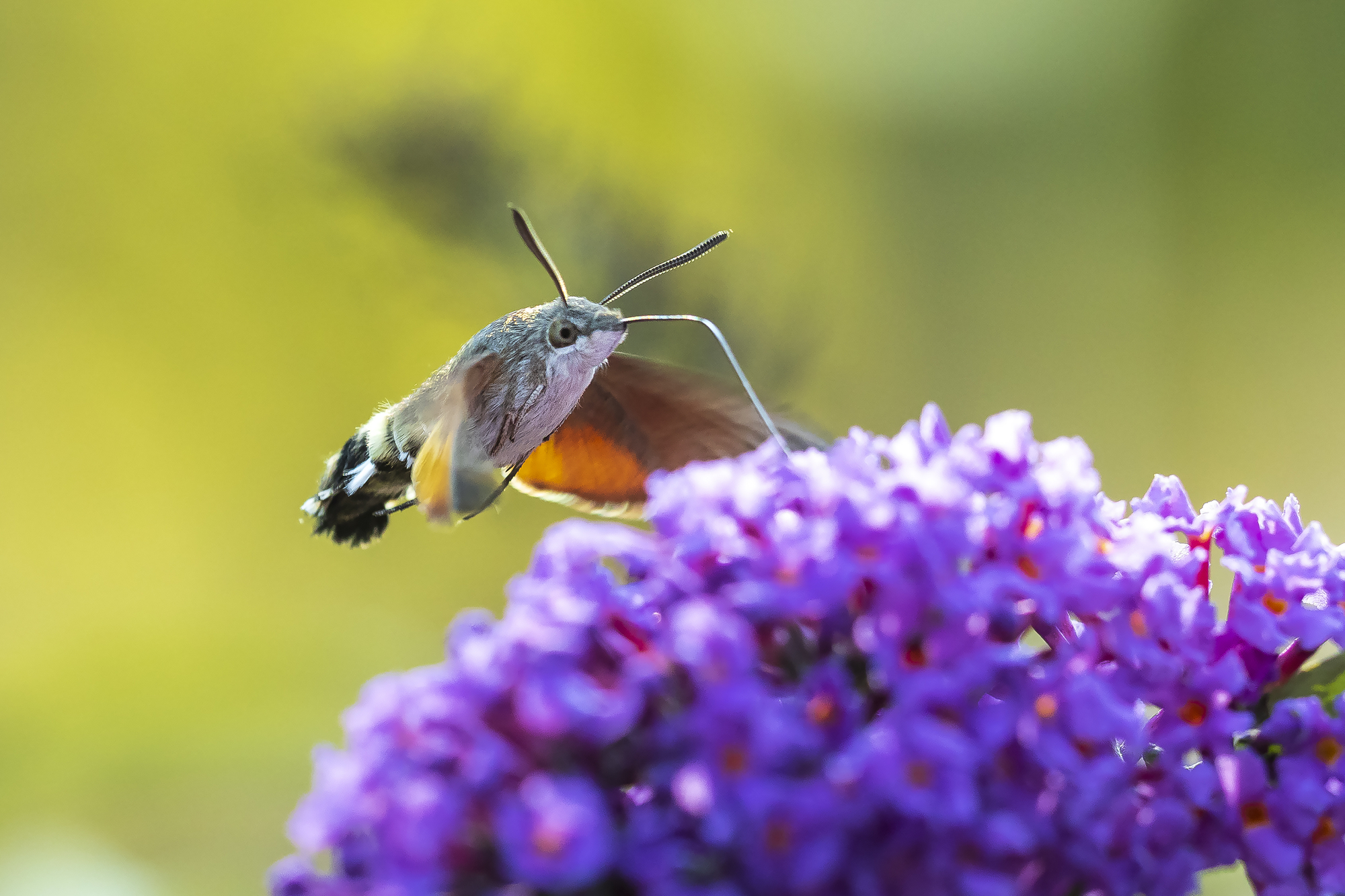 The Hummingbird moth family is called sphinx moths or hawk moths. There are about 1,450 species found all over the world.

The genus Hemaris is collectively known in North America as Hummingbird moths, of which there are four defined native species.

These moth species are sometimes called “Hummingbird Clearwings” because their wings appear mostly transparent. The front wings have dark spots near the base, and the hind wings have an orange-yellow band along the edge.

You might think such an exotic creature as a Hummingbird moth must be rare. However, these moths are actually common in North America, east of the Rocky Mountains.

They can be found anywhere from May to August and are most active during the day, unlike most moths.

You’re more likely to see them moving from flower to flower in forests or meadows rather than in your backyard, but they have been known to visit flower gardens for the nectar.

The thought of getting a species of moth and a bird confused sounds crazy, right? But these two creatures have a lot of really prominent features in common. Now that we know a little more, let’s compare them side by side.

Hummingbird moths and hummingbirds share the common trait of feeding on the nectar of flowers. They are attracted to tubular or trumpet-shaped flowers like those in the mint family.

They extend their long tongues deep into the tubular flower to get to the nectar. While feeding, they also help pollinate the host plants by transferring pollen from the stamen to the pistil.

Another similarity between these two creatures is their flying style. Moths and hummingbirds can hover in midair while feeding on nectar, allowing them to drink without landing on the ground or perching on a branch.

To hover, they both beat their wings rapidly in a figure-eight pattern. This gives them the lift they need to stay in one spot. It takes a lot of energy to fly like this, but it provides much more maneuverability than fixed-wing flight.

As you can probably guess, both creatures make a humming noise while flying. The sound is generated by the rapid movement of their wings.

The frequency of the humming noise is often too high for humans to hear, but we can feel it. If you manage to put your hand close to a hummingbird or a Hummingbird moth while it’s flying, you can feel the vibration of its wings.

An Example of Convergent Evolution

In the case of the Hummingbird moth and the hummingbird, their shared habitat and feeding habits have led to them evolving similar physical traits and behaviors. 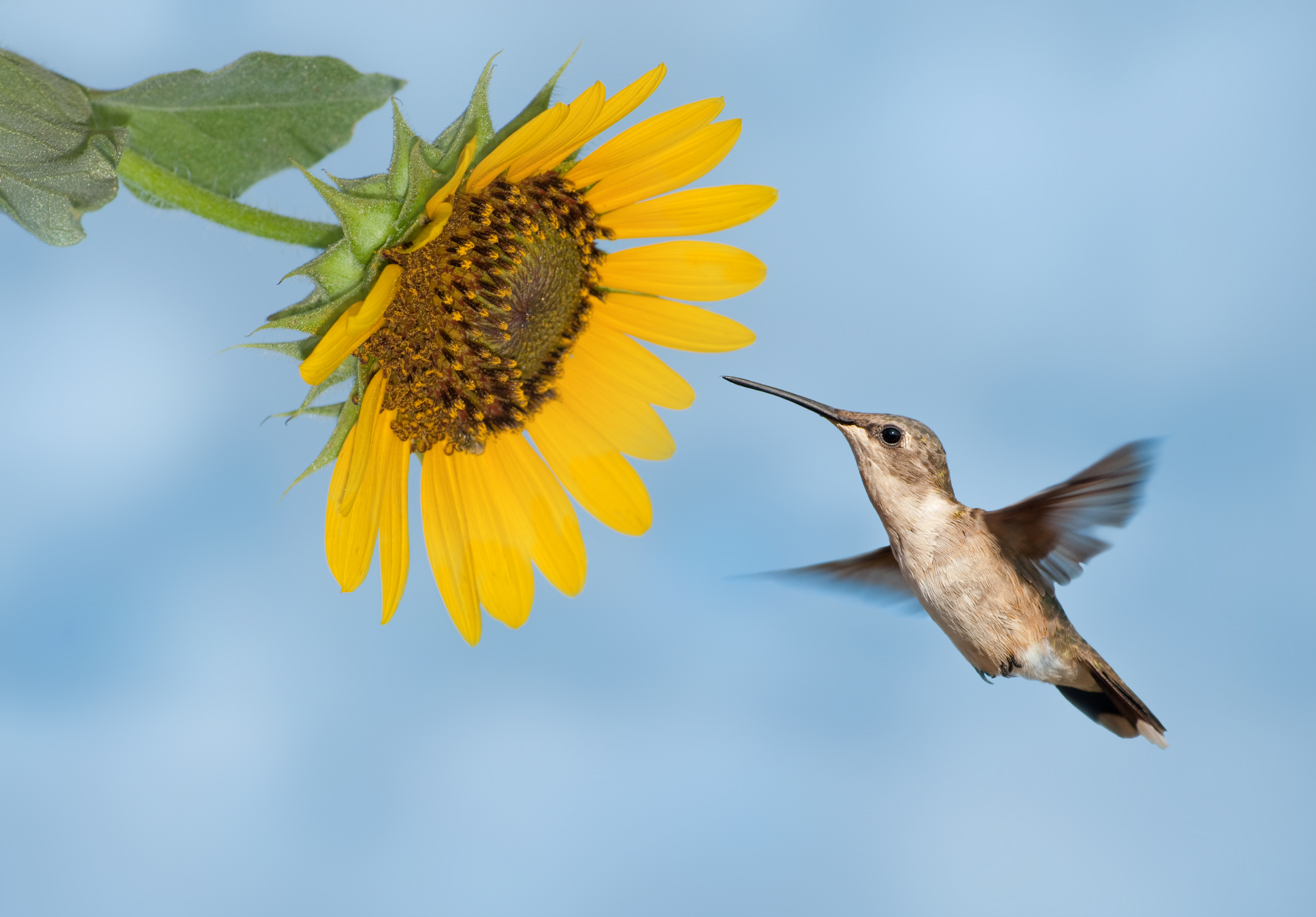 Hummingbird Moth vs. Hummingbird: How to Tell The Difference

Now that we know all about the similarities between these two creatures let’s talk about how to tell them apart. After all, if you’re out in nature and see something that looks like a hummingbird, you probably want to be sure before you start calling it one!

The easiest way to tell these two creatures apart is by their size. Hummingbird moths are small, with a wingspan of 2 to 3 inches, while hummingbirds have a wingspan of 4 to 6 inches.

Another difference is that Hummingbird moths fly during the day, while hummingbirds are most active at dawn and dusk.

If you see something flying around during the day that looks like a hummingbird, it’s probably a Hummingbird moth.

Another way to tell them apart is by their color. Hummingbird moths have a gray or brown body, while hummingbirds are brightly colored. The males often have iridescent feathers in shades of green, blue, or purple.

The females and juveniles are duller, with gray or brown feathers. These are more likely to be confused with Hummingbird moths.

The main difference you’ll notice between a hummingbird and a Hummingbird moth is that the moth has a long proboscis (a straw-like mouthpart) that it uses to sip nectar from flowers.

On a passing glance, as the animal hovers around flowers, this proboscis may resemble the long curved beak of a hummingbird.

The main giveaway is the antennae. If you can get a good look at the creature’s head, you’ll notice the moth’s antennae are much longer and have a feathery appearance.

I had to ask an expert the first time I was baffled by the appearance of a Hummingbird moth. But, now that you know the difference between a Hummingbird moth and a hummingbird, you can impress your friends with your knowledge the next time you see one of these creatures!