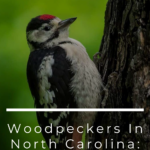 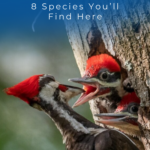 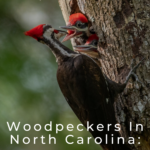 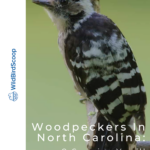 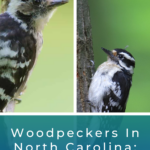 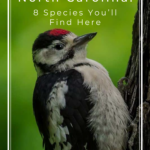 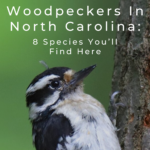 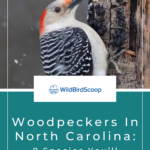 North Carolina is known for its mild weather, and it’s this climate that attracts more than 400 species of birds, including eight different species of woodpeckers.

Some of these feathered friends are permanent residents of the state, while others are migratory and only spending a few months out of the year in the Tar Heel State. Here, we’ll discuss everything you need to know about woodpeckers in North Carolina, from how to identify each individual species to where they most like to spend their time.

As you may have guessed, these birds are called red-bellied woodpeckers due to the faded red color they have on their bellies.  They have black-and-white striped upperparts. Both sexes have red napes, while only males have red crests.

You’re bound to see these medium-sized woodpeckers pretty much everywhere in North Carolina since they’re permanent residents of the state, but they spend most of their time in the nests they build in holes they dig into dead trees. They’re considered the most common type of woodpeckers in the state, but their population is smaller in the mountainous region.

Like other woodpeckers, their diet consists mainly of insects, berries, and nuts, and if you’re looking to attract this bird to your backyard, you can easily draw them in with sunflower seeds or suet.

Red-headed woodpeckers are the easiest woodpeckers to identify with their beautiful and bright red heads and white underparts.

Our red-headed friends are permanent North Carolina residents, but they aren’t usually found in the mountains. Their common hangouts include woodlands, swamps, and other wetland areas, but they’re known for their constant habitat shift, so finding them in the same area for two consecutive years is a rarity. These location changes usually depend on the scarcity and abundance of acorns in the area.

Though these birds will feast on fruits and nuts, they will also eat insects. In fact, part of what makes these woodpeckers unique is their ability to catch insects as they fly through the air.

Though yellow-bellied sapsuckers are predominantly black and white, their white underparts have a yellowish tint. While only males have red throats, both sexes have red patches on top of their heads. They also have straight bills, long wings, and stiff pointed tails.

North Carolina is one of the wintering grounds for these sapsuckers, as they breed and nest mostly on top of its mountains. So, if you ever find yourself on a peaceful hike on Whiteside Mountain, for instance, keep your eyes peeled; you just might spot one.

As you may have guessed by this bird’s moniker, sapsucker, they drill wells in live trees to feed on the dripping sap. This method of feeding is twice as effective; not only do the birds fill up on the sap, but they also get to snack on the other creatures (like insects) that are drawn to the sticky, oozing liquid.

Downy woodpeckers are the smallest woodpecker species found in North Carolina. This bird sports black upperparts and a white checkered pattern on its back, and a male of this species stands out from the female with a red patch on the back of his head.

If you’re looking to lure this bird to your backyard, fill your feeder with black oil sunflower seeds, peanuts, and suet, and if you’re out and about in nature, you can find these woodpeckers in open woodlands, forests, and parks all year long.

If you listen carefully, you’ll hear the downy woodpecker rapidly drumming on trees with its beak to communicate with others of its kind, mark its territory, or send out a mating call.

At first glance, it’s hard to identify hairy woodpeckers, as they’re so similar in appearance to its sibling species, the downy. But in taking a closer look, you’ll notice hairy woodpeckers are larger and have longer bills. To further distinguish the two, note the sounds of their calls and drumming; our hairy friend is much louder than the downy.

Though nonmigratory woodpeckers are typically found in North Carolina’s woodlands, forests, and rivers, including the Roanoke River, they’re also common visitors to backyard feeders, where they will happily enjoy suet, peanuts, or black oil sunflower seeds. You’ll probably find this bird digging to find insects to eat or to build a home in a dead tree, but finding a pair of hairy woodpeckers nesting on a mountaintop is likely, as well.

These woodpeckers live in family groups. They excavate holes in old living pine trees to lay their eggs, and they use the sap from the holes to protect them from snakes and other threats, and in North Carolina, they prefer to nest in longleaf pine forests and on the Lower Coastal Plain.

You’ll have to look extra hard to find a red-cockaded woodpecker, unfortunately, as they’re currently listed as endangered species. Their preference for specific habitats — usually pine trees — caused a significant decline in their population, as the state faced a loss of pine trees thanks to factors like timber harvest and development.

Northern flickers stand out by their brownish color with black bars and black spots, and those commonly seen in North Carolina sport flecks of bright yellow on their tails. Male Northern flickers have black mustaches that females are missing.

Though these woodpeckers are migratory birds, you can find them in-state all year round. However, not all of these birds migrate to the same area. Flickers found along the coast usually migrate towards the south in winter months, and areas void of these birds in the summer may become more populated by them come winter.

Unlike other woodpeckers, Northern flickers prefer to search for their food on the ground. They’ll eat fruits and seeds, especially in the wintertime, and though they will snack on the occasional caterpillar or termite, they mostly prefer beetle larvae and ants.

Pileated woodpeckers are not only the largest species in North Carolina but perhaps the largest woodpecker in North America, second only to the probably-extinct Ivory-billed bird.

You can easily identify a pileated woodpecker by its bright red crest and white underwings. Take your bird identification a step further and separate the males from the females by noting the female’s black forehead and mustache-like stripe.

An essentially nonmigratory breed, the pileated woodpecker is one of North Carolina’s permanent residents, and these birds can most frequently be found in forests near swamps, as they require large trees to nest and forage for insects, fruits, and nuts to eat.

All woodpeckers play important roles, helping to keep the balance of our ecosystem by controlling the insect population and providing nesting cavities for birds that can’t peck their own nests.

North Carolina is a state lucky enough to be blessed with eight different species of this bird, so if you’re an Old North native or just a visitor passing through, keep your eyes peeled for one of the woodpeckers we described above.

Furthermore, commit to protecting these beautiful creatures by reducing plastic use, turning off lights at high-rise buildings at night to prevent bird collisions, or doing something as simple as hanging a backyard feeder filled with bird-friendly nutrients.