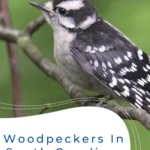 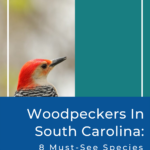 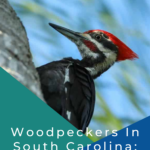 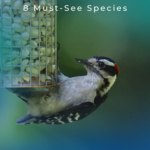 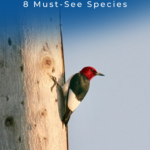 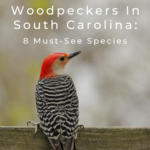 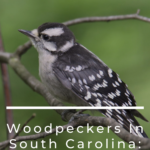 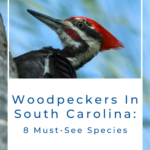 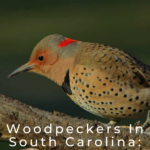 South Carolina has quite a full history from the role it played in the Civil War, to being the eighth state to ratify the United States Constitution in 1788. But the southeastern state has more to offer than just historical significance; it’s also filled with beautiful natural scenery for both state residents and tourists to explore.

Nature-lovers of all ages will enjoy strolling through the South Carolina woods and observing the wildlife in its natural habitat, including 424 species of birds, four of which are already extinct.

Amateur and seasoned birdwatchers alike will especially enjoy searching the 8 species of woodpeckers that call South Carolina home, and luckily for you, we’ve got the lowdown on all of them. Read on to find out all you need to know about these beautiful birds!

You can easily find the yellow-shafted northern flicker, or common flicker, next to the residential areas of South Carolina, and with a bit of luck and a bird feeder, you just might see one or two of these rather friendly birds in your backyard.

This large brown bird is slightly larger than other woodpeckers and features black-scalloped markings on its back and wings. When it’s in flight, pay close attention to its wings, and you’ll see the yellow flash of color that gives the yellow-shafted flicker its name.

Unlike other woodpeckers, the northern flicker is most commonly found on the ground or atop fallen branches or logs, searching for ant colonies and the occasional bit of plant matter to feed on.

Pileated woodpeckers are known for a lot, but mostly for being the inspiration behind the famous and beloved cartoon character, Woody Woodpecker. This large bird is rather friendly, and if you have a feeder filled with suet, it will visit your backyard often.

Feathers on these woodpeckers are mostly black, except for the white stripes on their faces and necks and bright red crests. You’ll recognize a male of this species by the stripe of red feathers on its cheek.

Unlike other species of woodpeckers, pileated woodpeckers dig rectangle-shaped holes in rotten or dying trees to hunt for carpenter ants and other insects to feed on. Holes left by the pileated species are big enough to break a small tree and often attract other wildlife.

In the eastern region of the United States, including South Carolina, these woodpeckers inhabit both large, standing trees, young forests, and partially wooded residential areas.

It’s quite common to see the red-bellied woodpecker in South Carolina all year long, especially in forests of old oak or young pine.

The name of this species is somewhat misleading. Though you would expect these woodpeckers to sport crimson feathers on their bellies, their stomachs are primarily white and only display a few flecks of pinkish-red that you’ll only notice if you’re paying close attention. These woodpeckers also have black and white striped backs and a bright red cap and nape.

It’s not unusual to see this woodpecker flitting about in residential areas, perhaps hanging around a feeder filled with peanuts, sunflower seeds, or suet. It has a barbed-tip tongue that it uses to catch larvae and worms from the deep crevices in trees, and it can also be found feeding on acorns, nuts, seeds, small birds, and lizards.

These birds are also known to store food in cavities for later, stocking up for the colder winter months, like other species in the Melanerpes genus.

You might not recognize a red-headed woodpecker when it’s young, but as it ages and the gray feathers on its head begin to turn red, you’ll surely spot a bird of this species. That, plus the bold checkerboard-like pattern on its wings, make these woodpeckers relatively easy to spot.

These birds use their spike-like bills to dig into trees to find hidden insects and larvae, but usually, they prefer to catch flying insects from midair. Sometimes they’ll even snack on seeds, grapes, nuts, berries, and small rodents or birds.

Much like other species within the Melanerpes genus, the red-headed woodpecker stores food for later months, but it’s the only one that uses a cover of wood or bark to cover its storage cavities.

The behavior of these woodpeckers in their habitat can be quite aggressive, as it competes with the red-bellied woodpecker for possession of nesting cavities and will even go as far as pecking other birds’ eggs to claim a spot.

You can easily identify the red-cockaded woodpecker, thanks to its distinctive black and white stripes, the black feathers that surround its white face, and the red streaks that grow on the sides of the male’s cap during mating season.

Despite being able to identify these birds, however, you may not see too many of them, as these woodpeckers are considered an endangered species due to a drastic loss of habitat. The remaining red-cockaded woodpeckers can be found in areas of the eastern United States throughout the year; in South Carolina specifically, they nest in the Francis Marion and Sumter National Forests.

Red-cockaded woodpeckers only nest in live pine trees and usually prefer those that have been affected by heart rot and follow the heart rot pattern to dig nests. Then, these woodpeckers dig in the tree for beetles, ants, roaches, or spiders. When insects are scarce, they will settle for a meal of fruit or seeds.

If you have a feeder stocked with suet and seeds in your backyard, the woodpeckers that frequent it regularly are probably downy woodpeckers. You’ll know it by its black and white body, chisel-like bill, and straight-backed posture. Males of this species grow red patches at the backs of their heads, while a female does not.

It’s common for these woodpeckers to make a lot of noise, especially in the spring and summer, with both their shrill call and loud drumming on trees. When it’s not relying on sustenance from your feeder, the downy can be found feeding on larvae, beetles, ants, caterpillars, acorns, grapes, and berries it finds while foraging.

When it comes to finding food, the male and female downy woodpeckers divide and conquer, with males going to smaller branches and weed stems and females heading to larger branches and tree trunks.

Now that you know how to spot a downy, spotting a hairy woodpecker in the forest is a breeze — just look for the woodpecker with the longer bill!

This species can be found in the state of South Carolina (and in the majority of North America) during every season of the year and prefers to make mature or recently burned forests, woodlots, or parks its habitat. Our hairy friend feeds on the larvae of wood-boring beetles, ants, and caterpillars, and has also been known to follow the pileated woodpecker and the yellow-bellied sapsucker around, sucking up insects that have been left behind and helping itself to sap from the sap wells.

Just like red-cockaded woodpeckers, the hairy species uses the pattern of heart rot in live trees to excavate its nesting spots.

When the breeding season for the yellow-bellied sapsucker ends, it leaves Canada and heads toward the United States before ultimately deciding to settle in an eastern state. This is the only woodpecker species in eastern North America that’s completely migratory, with some members of this family going as far as Panama.

Despite the implications of its name, these sapsuckers are mostly black and white, with both males and females of this species boasting red foreheads and white or yellowish underparts. Males also sport crimson-colored throats, while female sapsuckers’ are white.

You can find this bird by paying attention to the organized sap wells that it digs into maple and birch trees to feed on the sugary sap and any larvae that can be found inside. You can also follow the yellow-bellied sapsucker’s drumming sounds on trees and metal objects.

Woodpeckers are friendly and represent a great attraction to birders and wildlife enthusiasts. Forests currently cover 67 percent of the land in South Carolina, so it’s no surprise that such a large population of these wood-loving birds make their home in the Palmetto State during the year.

And remember, it’s common for these birds to be found near residential areas, too, so if you want to easily spot a woodpecker near your home in South Carolina, make sure that your bird feeder is full of suet and seeds during the cold months.